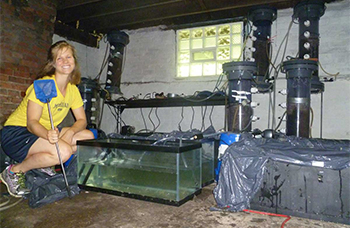 A master’s student at the University of Michigan is testing aquaculture in Detroit by cultivating 400 shrimp from larvae and distributing the locally grown seafood throughout the city.

“As far as a market for seafood, my number one priority is within the city limits,” says Elizabeth Grobbel, who is studying environmental engineering. “I’ll be giving out samples of the first crop to interested parties and, for subsequent crops, I am looking into possibilities with the Eastern Market, nearby restaurants, and other local entities. My goal is for the shrimp to be produced, distributed, and consumed all in Detroit.”

Shrimp, which take three to four months to mature, are typically fed commercial shrimp feed. However, with support from U-M undergraduate biology student Daniel Bloch, Grobbel is testing the feasibility of using spent beer-brewing grains as a food source. She is test-feeding the shrimp spent grain from Wolverine State Brewing Co. in Ann Arbor.

By conducting her pilot project in the basement of a vacant Detroit home, belonging to U-M alumnus Darin McLeskey, Grobbel hopes to show that it’s possible to find productive uses for the city’s vacant properties.

“Detroit has an estimated 79,000 vacant homes, many of which the city wants to demolish,” Grobbel says. “I started to question what a good alternative might be for some of the houses, and — given the lack of locally produced protein in the city — figured shrimp aquaculture was worth a try.”

While Grobbel is investigating the legal process behind selling and distributing unprocessed, frozen shrimp in Michigan, her project will soon come to an end as she takes a full-time position next year as director of sustainability for Graham Partners near Philadelphia.

“As much as I’d love to see the shrimp aquaculture venture continue, the outcome of the project really is a feasibility/case study of small-scale indoor urban aquaculture,” Grobbel says. “I want to show that you can produce seafood locally, with little overhead, and maybe even make some money in the process. I’m also hoping the results will be of interest to other Rust Belt cities experiencing vacancy and housing decline.”

Grobbel isn’t the only one pursuing urban aquaculture. Recovery Park in Detroit, for instance, plans to grow fish such as tilapia, trout, and sea bass in the city, while employing up to 200 recovering substance abusers and reformed ex-felons.

U-M’s Graham Sustainability Institute will publish Grobbel’s completed research report in December. To learn more about her project, or to register to attend one of Grobbel’s shrimp taste testing events in September, click here.