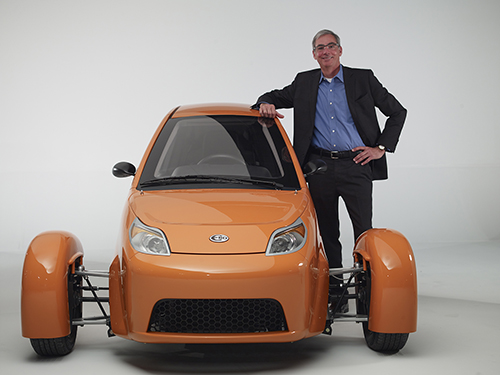 Production of the Elio — an enclosed, three-wheel vehicle that achieves 84 mpg — may take place in a former General Motors plant in Shreveport, La., but metro Detroit suppliers will have fingerprints all over it.

“Where the (components) are coming from matters to us,” says Paul Elio, who founded Elio Motors in 2008. “We have 34 suppliers engaged. They’re the who’s who of the North American supply base, and I think all but two of them have a presence in southeast Michigan.

Among those suppliers are Comau and Lear Corp. in Southfield and Detroit Thermal Systems in Romulus. Altair Engineering in Troy, for instance, acts as Elio’s engineering arm, says Cliff Boggs, vice president of business development for Altair ProductDesign.

“One of the unique parts of the Elio project is that Paul (Elio) is empowering the suppliers to be responsible for each one of their systems,” Boggs says. “In a typical vehicle program, the OEM dictates the requirements. In our program, we’re asking the supplier to tell us what the right requirements are. So this optimizes the cost model — we aren’t spending money that we might if we dictated an overly aggressive requirement.”

Altair, whose job is to make sure that all of the components come together and work as a system, has hosted supplier summits that every six to eight weeks, in preparation for the production, which is set for 2015, Boggs says. “All of the suppliers come together, and for three days, we just shut the doors and work on the interface issues. It’s a very dynamic event.”

The inclusion of Detroit and North American supplier is very important to Elio, who says that his company has three main objectives: “To reduce our dependence on foreign oil, create American jobs, and reduce emissions. Elio Motors does all three of those things in spades,” he says.

Ultimately, the production of the Elio, which is priced at $6,800, will create a new vehicle segment, Elio says. “Technically, it’s a motorcycle, but we have a lot of car-like features, like a steering wheel, air bags, and power locks. This is an ‘and’ vehicle, not and ‘or’ vehicle. I think the majority of the people that will buy (the Elio) will buy it in addition to their existing cars.”

Earlier this month, the new automaker announced it had secured 10,000 reservations for the vehicle. Reservations, which range from $100 to $1,000, can be made at eliomotors.com.