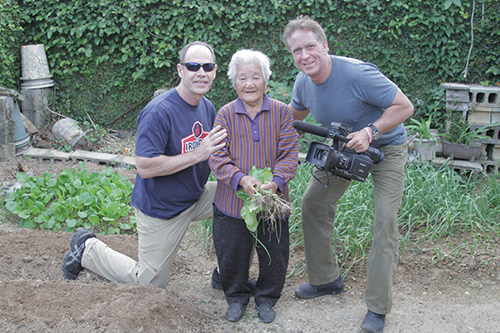 Detroit Public Television is working with Keith Famie, a 10-time Michigan Emmy award-winning director/producer in Novi, to bring his three-part documentary series, The Embrace of Aging, to a national audience.

“We feel like this has a really good chance to have national distribution with this series,” says Jeff Forster, vice president of production at DPTV. “There are two demographics in public television: ages 1 to 8 and 45-plus. I think the 45-plus demographic is one that could find an emotional connection with this (series).”

The Embrace of Aging is comprised of The Male Perspective of Growing Old, which originally aired on DPTV during the holidays, as well as The Female Perspective of Growing Old and The Embrace of Dying. Each piece explores different aspects of the aging and dying process, based on interviews with medical professionals, authors, and significant individuals.

“What’s really cool to me is that (this series) isn’t morbid,” Forster says. “It’s a part of life, and I think Keith has treated it in a way baby boomers like to look at things: in an analytical way. We see what we can do, and then we go out there and work on it.”

Famie refers to the series as a collection of inspirations. “They call you to action. You’re going to find a way to eat better, live better, get healthier, go see your doctor, get a new set of friends, (and) love your wife more,” he says.

Famie’s Wixom-based Visionalist Entertainment Productions is currently in the process of editing the 13-part Women’s series, which covers everything from menopause to women who climb mountains in their 70s. The filming for the documentary took him as far as Okinawa, Japan, where he spent a week with a scientist who has studied why women from the community live for so long.

“What makes this series successful is that it combines great minds in medicine and science with wonderful human interest stories,” says Famie, noting that he expects the Women’s series to be completed this spring.

The Embrace of Dying — which Famie says is about how one lives their life knowing they’re going to die someday — is still in production and is expected to be completed by late fall. Currently, Famie is working on soliciting sponsorships to help take the entire series to a national level.

Once the funding is secured, Forster says the Detroit station can help distribute the series to 356 PBS stations around the country. “The one thing about public television is that most of the stations are independent and they make a decision at a station level versus at a network level. But from past experience, we believe (these stations) will be very interested in the programs that Keith has created.”

For more information or to watch trailers for the series, visit embraceofaging.com.