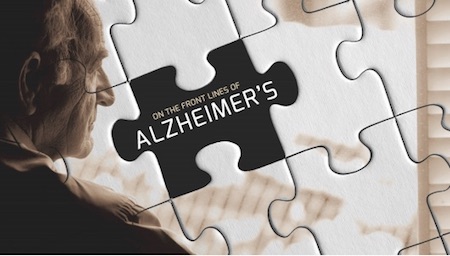 After losing his father to Alzheimer’s, local filmmaker Keith Famie knew he wanted to dedicate time to delve deeply into the disease. He recently launched the first trailer for his 12-part documentary, “On the Front Lines of Today’s Aging Issues,” which he plans to create over the next few years.

The first in the series, “On the Front Lines of Alzheimer’s,” will focus on neuroscientists, clinicians, and doctors from around the world who are working to combat Alzheimer’s and dementia-related diseases and the modifying strategies they’re currently working on. The film will also detail the history of Alzheimer’s, and provide information regarding high-risk populations, current medications, and global resources that are currently available to Alzheimer’s patients and their families.

“My father, a World War II hero and dad of three, suffered such a destiny,” says Famie. “When he took his last breath with me holding his hand totally not knowing who I was as I sat at his bedside, I vowed to one day do what I could as a filmmaker to help shed a light on what families can do and how we all can better live a life to avoid as much as possible, such a fate. The time is now.”

Famie is also currently working with Dr. Richard S. Issacson, director at the Alzheimer’s Prevention Clinic and the Neurology Residency Training Program at Weill Cornell Medical College, who will be filming for the documentary in New York City. Famie is currently signing up sponsors for the film, as well.

The trailer can be viewed here.

IN RELATED NEWS, Famie was nominated for the 2017 Michigan EMMY Awards for a  film about mental health he directed, “Death is Not the Answer,” which encourages viewers to rethink mental health issues through personal stories. The film was produced by Detroit Public Television and Visionalist Entertainment Productions in Wixom.