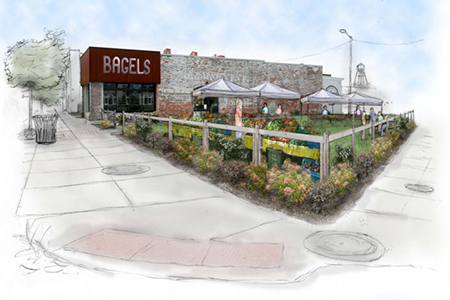 A local farmers market is coming to Detroit’s Corktown neighborhood in May, and will offer produce, flowers, and prepared foods all grown or made in Corktown.

Acre, a sustainable urban farm in Detroit, Detroit Institute of Bagels, and Brother Nature Farms, (all located in Corktown) are organizing the market. Hannah Clark, owner of Acre and market manager for the Corktown Farmers Market, says Brother Nature Farms and Acre expressed interest in selling to the community where the crops are grown.

“We thought that a combination of the Corktown neighborhood, (as well as) having a bunch of people who are really interested in food and looking forward to being able to walk to the market, along with people coming out of downtown, (would make for a) great location for the farmers market,” Clark says.

The market, to be located at the intersection of the Lodge Service Drive and Michigan Avenue, next to Detroit Institute of Bagels, will have a mix of vendors. Clark says Brother Nature Produce will sell greens and herbs. Produce from Acre, which has a garden in north Corktown, along with fresh cut flowers, will also be sold.

“We’re looking at some prepared foods,” Clark says. “Gold Cash Gold (along Michigan Avenue) is interested in being a part of it and (selling) baked goods from their restaurant.”

A fence is now being installed to surround the market, and pavers, landscaping, and tables will be added, she says.

The farmers market will be open from 4 p.m. to 7 p.m. on Thursdays starting May 14 and operate through at least the end of September.