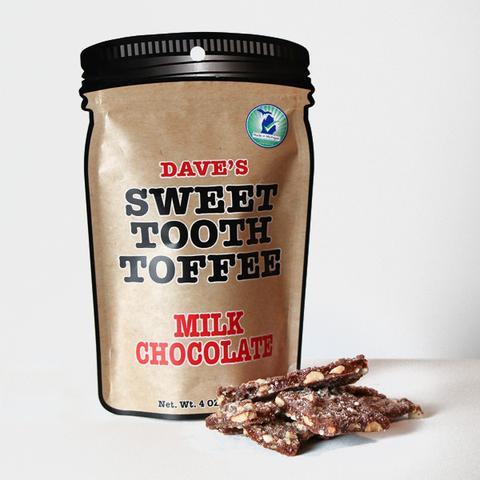 When Dave Chmielewski began making his toffee recipe eight years ago, he took homemade and handmade literally, making small batches in his kitchen for friends and family. Though his toffee is now sold in 5,000 stores nationwide and made at a facility in Harrison Township, Chmielewski and his son, Andrew, who runs Dave’s Sweet Tooth, still take the original philosophy to heart.

After selling Dave’s toffee at local craft shows, Andrew decided to grow the venture into a business, moving from their home kitchen to a friend’s kitchen at the Mirage Banquet Center.

“I get to meet new people and introduce them to an awesome product every day, and it’s always awesome to see their reactions,” Andrew says. “I found out two weeks ago about Forbes 30 Under 30, and it was a really exciting way to start the new year. Hopefully it’ll help us kick some things into high gear for the new year, but it’s really been an honor.”

DST has doubled its revenue for four consecutive years, and is projected to break $1 million in revenue for the first time this year. The company has 15 employees, and Andrew expects that number to increase to 22 within the year, to keep up with demand. They also plan to expand to an adjacent facility, doubling their baking space.

DST toffee is currently sold online, as well as at 2,800 HomeGoods, TJ Maxx, and Marshalls stores nationwide, and several other retailers. Within the next 30 days, Andrew says the product will be available at all 126 Kroger stores throughout Michigan.

Andrew says the company plans to continue innovating by offering a flavor of the month club as a way for customers to try experimental toffee flavors. Though all the toffee is made and packaged by hand (DST just received their first jar labeler yesterday), Andrew plans to keep it that way, regardless of the company’s commercial success. When asked how they keep up with demand, despite baking toffee in small, handmade batches, says they “make a lot of batches.”

More information about DST can be found here.