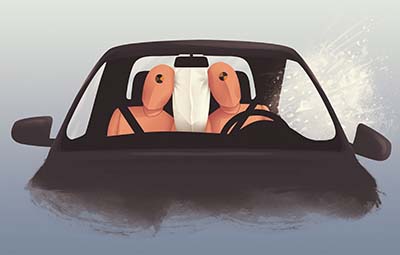 Livonia-based automotive supplier ZF TRW has developed a new center airbag that is placed between the driver and the front seat passenger to improve side impact protection.

“The risk to far-side occupants during side impact crashes is significant,” says Dirk Schultz, global engineering director for ZF TRW’s inflatable restraints systems. “Accident research shows that in the USA, nearly 30 percent of side impact fatalities involve far side events.”

Schultz says in the event of a far-side impact where an oncoming vehicle or object strikes the passenger side of the vehicle with sufficient force, the center airbag can help keep the driver in place. He says it can also reduce the risk of the driver hitting the front seat passenger or the interior of the vehicle.

Addionally, he says the center airbag module is equipped with a hybrid inflator that uses a one-piece woven bag, which when deployed is in the shape of a triangle. Schultz says the module can be designed to meet various OEM vehicle design choices.

He says ZF TRW is involved in several development programs and research studies with vehicle manufacturers.

In July, ZF TRW launched a series of semi-automated driver assist features, including automatic steering, braking, and acceleration, along with a vehicle radar and camera fusion system.