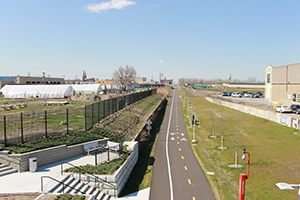 The partners of Link Detroit have completed a collection of five projects connecting 20 miles of continuous walking and biking paths in downtown Detroit, Midtown, the riverfront, Eastern Market, and Hamtramck.

The $21 million project took approximately three years, says Tom Woiwode, director of the GreenWays Imitative with the Community Foundation for Southeast Michigan. He says the project is “a continuation of a network of greenways that will absolutely transform and connect the entire city of Detroit.”

The project includes extending the Dequindre Cut from Gratiot to Mack Avenue, with an additional connecting trail into Eastern Market along the north side of Wilkins. In turn, bike lanes were added from the end of the Dequindre Cut to Hamtramck, while pedestrian improvements and bike parking stations were added along Russell Street.

In addition, Woiwode says a Midtown Loop path connecting Eastern Market to Midtown was added, while more security boxes and cameras were installed.

Future greenway projects include the Inner Circle Greenway, a 26-mile non-motorized pathway that will encircle the city of Detroit, Woiwode says.

To celebrate the completion Link Detroit partners will host a public ribbon-cutting ceremony on Friday, to be attended by Mayor Mike Duggan.