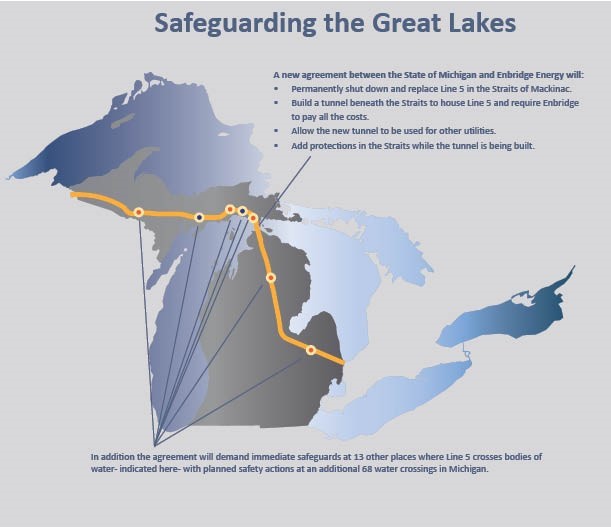 The state of Michigan and Enbridge Energy Wednesday announced an agreement that will lead to major safety enhancements along the entire length of the Line 5 petroleum pipeline crossing the state, permanently shut down the current segment that crosses the Straits of Mackinac, and construct a multi-use utility tunnel beneath the Straits.

Line 5 is a 65-year-old pipeline that carries oil and liquid natural gas from Superior, Wis., to Sarnia, Ontario. The portion of pipeline that runs below the Straits is located two miles west of the Mackinac Bridge.

All costs for the tunnel will be paid by Enbridge. Under the agreement, Enbridge would pay for all design, construction, operation, and maintenance of the tunnel for up to 99 years, subject to approvals by the Mackinac Bridge Authority.

Tunnel construction is estimated to cost between $350 million to $500 million over the 7- to 10-year duration of the project. This major infrastructure initiative for northern Michigan, which would be owned by the Mackinac Bridge Authority and in which Enbridge would lease space, also could house additional infrastructure, such as broadband and electrical lines.

“This common-sense solution offers the greatest possible safeguards to Michigan’s waters while maintaining critical connections to ensure Michigan residents have the energy resources they need,” says Gov. Rick Snyder. “The historic agreement will result in eliminating nearly every risk of an oil leak in the Straits and provide added protections to the Great Lakes.

“It also will allow for multiple utilities to be housed and protected, better connecting our peninsulas, improving energy security and supporting economic development. The taxpayers of Michigan will benefit greatly from this project but won’t have to pay for it.”

The new accord also demands specific actions at sensitive Line 5 water crossings other than the Straits, expanding protections along the length of the pipeline in Michigan.

“Pipeline safety has always been a top priority for me,” says U.S. Rep. Fred Upton, chair of the House Subcommittee on Energy. “I led the bipartisan effort on two major pipeline safety and accountability bills in the last several years. Getting Enbridge to pay for 100 percent of the Line 5 replacement tunnel is the right approach and one I’ve sought since day one.

“I want to thank the state of Michigan, and Gov. Snyder, for their clear-headed leadership on this issue. This agreement needs to get done as quickly as possible for the protection of our Great Lakes.”

Assessments to date of the Line 5 Straits crossing confirm the pipeline’s integrity. However, the agreement will demand additional measures to reduce risk during tunnel construction. Those safety measures will:

The new agreement would also:

A previous report conducted by Enbridge and overseen by the state identified a tunnel beneath the Straits as a feasible replacement alternative to the existing Line 5 Straits crossing.

Line 5 is 645 miles long and transports up to 540,000 barrels a day of light crude oil and natural gas liquids, including propane. Below the Straits of Mackinac, the pipeline splits into two lines that lie on the lake bottom within an easement issued by the state of Michigan. A new pipeline in the tunnel would not increase volumes or alter the types of products transported through the existing Line 5.