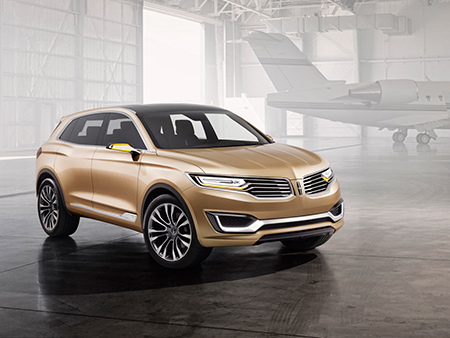 The Lincoln MKX Concept made its North American debut today at the Los Angeles Auto Show, hinting at a global SUV that will become the third of four all-new Lincoln vehicles due by 2016.

“With the Lincoln MKX Concept, we’re delighted to share a glimpse of the continually evolving future of Lincoln,” says Kumar Galhotra, president of Lincoln, crediting the automaker’s 15 percent year over years sales growth in the U.S. largely to the release of the first two all-new vehicles: the MKZ sedan and MKC utility.

Lincoln hosted several customer research clinics in China and the United States, and found that Chinese customers are looking for a medium premium utility vehicle that expresses off-road capability and sportiness.

The concept car also offers a new interpretation of Lincoln’s signature full-width tail lamps. “Concept vehicles are defined by every design detail, and this MKX Concept shows how Lincoln’s thoughtful design philosophy continues to evolve,” says David Woodhouse, Lincoln design director. “The Lincoln brand was built on vehicles with stunning design, and the MKX Concept is the latest example.”

A Lincoln MKX production model would compete in the growing, global midsize premium utility segment, a segment that represents 36 percent of the global luxury utility market and is set to rise to 44 percent by 2018, according to data provided by IHS.

“The MKX Concept demonstrates the design direction for the third all-new vehicle from Lincoln, one that will capture the true essence of the brand — warm and inviting, beautifully styled, and with the promise of engaging technologies that appeal to a younger luxury consumer in a global market,” Galhotra says.

IN OTHER LINCOLN NEWS, the luxury automaker unveiled plans for a new dealer network offering an enhanced shopping and service experience.

When the program launches in December, more than 30 dedicated Lincoln Black Label dealers in six states will provide showroom space dedicated to serving Black Label customers.  Four will be in metro Detroit and one will be in Grand Rapids