Lincoln’s approach detection technology — a feature that senses when the driver comes near the vehicle and lights up the car — will be standard on the 2017 Continental.

“The Lincoln approach detection does more than just turn on lights,” says Sheryl Connelly, manager of global consumer trends and futuring at Ford Motor Co. “It allows Continental to welcome you as if arriving at a friend’s house for dinner, or checking into a resort. It makes you feel at home where you have everything you need and you are in a serene and familiar space.”

The technology, which first appeared on the 2015 MKC, can sense when the driver carrying the key fob comes within a range of eight feet of the vehicle. Connelly says the car then illuminates the ground beneath both front doors, highlights the location of the door handles with lights, and turns on interior lights on the door panels, instrument panel, and cupholders.

The 2017 Continental arrives in dealerships in the fall.

IN RELATED FORD NEWS, the automaker today announced details about a strobe light technology for its 2016 F-150 fleet customers and design details for the 2017 Fusion’s cupholders.

A strobe light kit will be available for the F-150 fleet customers, designed for utility, road construction, and municipal crews that need enhanced vehicle visibility when working on-site to warn other drivers to proceed with caution.

Kent Bock, manager of commercial accessory business development at Ford, says the front- and rear-mounted strobe lights can be seen as much as 1,000 feet away from the vehicle during the day and a mile at night. Customers can program the flash pattern to meet specific requirements.

Bock says the kit is also available for the 2016 F-Series Super Duty. 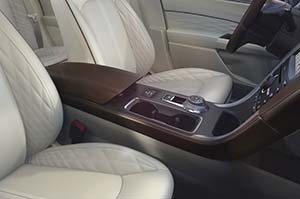 When designing the 2017 Fusion, Ford says it moved the cupholders to one in front of the other, with the front cupholder six inches forward from its location in the 2016 Fusion. That move allows the automaker to extend the armrest by nearly three inches and expand the armrest bin by an extra half-gallon.

“Being dissatisfied with your cup holders may be a minor annoyance, but it’s a daily one, which over time detracts from the overall car experience,” says Jolanta Coffey, manager of instrument panel and console at Ford. “On the other hand, when you like your cupholders, they can make your vehicle feel like home.”

Coffey says the cupholders are now in easy reach for 95 percent of the population and can hold a variety of cup sizes.â€‹