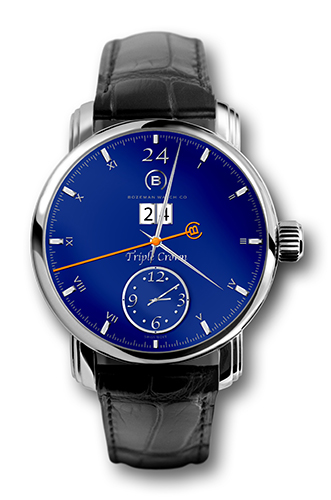 It’s not every day a shop owner sees someone like Detroit Tigers star Miguel Cabrera walk through the door of their business. But that’s what happened to Chris Wardle, founder and CEO of Bozeman Watch Co. in downtown Birmingham.

The result was the creation of two limited-edition watches: a $9,400 timepiece to commemorate Cabrera’s Triple Crown season in 2012, and a $8,900 watch called Smoke Wagon — a term that refers to the first baseman’s hitting prowess. The two watches are part of a dozen models Wardle has designed since he launched the business in 2005.

“The Triple Crown watch will have Roman numerals for one through 11, and the 12 will actually be ‘24’ for Miguel’s jersey number,” says Wardle, who started his business in Montana and still has a store there. The Michigan native opened a store in downtown Birmingham last year.

Only 90 of the Triple Crown watches will be produced, while 200 timepieces will be built under the Smoke Wagon label.

A portion of the proceeds from the nearly 300 watches will be donated to the Miguel Cabrera Foundation, a nonprofit started by the first baseman and his wife, Rosangel, that revitalizes baseball fields, promotes student engagement, and provides scholarships.

For more information about the Cabrera watch lines, as well as other models, check out the May/June issue of DBusiness magazine, now on newsstands.