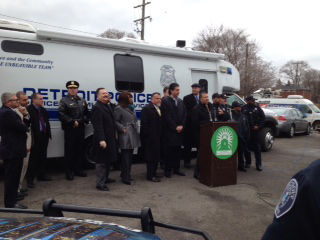 Seeking to mimic a successful crime-deterrence and security system in downtown Detroit, called Lighthouse, business and government leaders today announced the program would expand to other parts of the city. A command center for Lighthouse II, or Lighthouse Neighborhoods, will be located at the Coleman A. Young International Airport at Conner, north of Gratiot, starting this summer.

“We will have safe havens where members of the community can go to receive security and assistance,” says Detroit Police Chief James Craig. “This is only the beginning. Ideally, we’d like to have a lighthouse (safe haven) on every block.”

From a Marathon service station at McNichols and Wyoming of Detroit’s west side, owner Nasser Beydoun says his facility is participating in the program and is outfitted with a green light, security cameras, and trained personnel. “Our employees will offer assistance, and if there is a problem, we can call the police and they will come as quickly as possible,” he says.

A group of 20 people, ranging from officials of the Detroit Police Department to the Department of Homeland Security to Rock Ventures to Ilitch Holdings Inc., joined in announcing the Lighthouse expansion.

“We’ve seen some cities roll out similar programs, and Detroit is very well organized,” says Karinda L. Washington, an external affairs specialist with the Department of Homeland Security. “We have grants and other assistance we can provide as well as offer information on the latest technological tools to assist with these programs.”

Jason Watt, director of Detroit City Airport, says the command center will be staffed with trained personnel who will monitor areas across the city for potential and active crimes. “This is a wonderful opportunity for city residents as it complements the great work done by our police department and other security agencies each and every day,” Watt says. “We anticipate a direct positive impact on the neighborhoods.”

Over the last three years, more than 30 downtown businesses — working in concert with local, county, and state police, the Downtown Detroit Partnership, Department of Homeland Security, FBI, and Border Patrol — have installed more than 300 high-powered surveillance cameras in the central business district.

A command center, located in the lower level of Dan Gilbert’s Chase Building (the Qube), was set up to monitor the cameras and identify potential crime as it unfolds. In addition, each of the participating businesses — known as a lighthouse — provides 24/7 security, aid, shelter, information, and potential lodging.

For more information or to participate in Lighthouse Neighborhoods, call Detroit Police Commander Charles Wilson at (313) 596-2520.