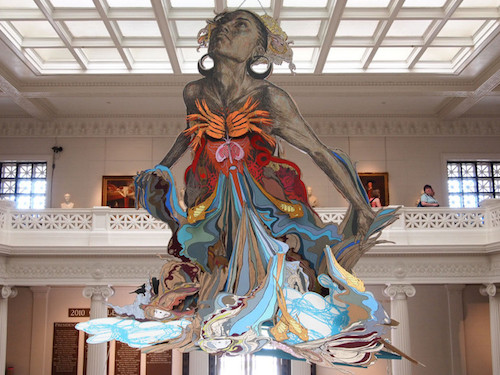 Library Street Collective, a downtown Detroit-based art gallery, is partnering with the Detroit Institute of Arts to bring a 20-foot-tall installation sculpture to the museum’s Great Hall this month.

Caledonia Curry, a New York-based street artist that goes by “Swoon,” created the installation piece, which is titled Thalassa after the Greek goddess of the sea, in response to her interest in environmental concerns that surround cities.

First shown at the New Orleans Museum of Art in 2011, the piece, which is adorned with imagery of sea creatures, will be suspended from the vaulted ceiling of the DIA’s Grand Hall from Sept. 24 to March 19. It is the first large-scale installation ever presented in the space.

Swoon’s installation at the DIA will also coincide with a community mural project in Detroit’s Jefferson-Chalmers district that she will execute with the assistance of several local artists.

“It will be a powerful experience for the residents who encounter Swoon’s Jefferson-Chalmers mural in their daily life to see a part of their neighborhood reflected inside the museum,” says Salvador Salort-Pons, director of the DIA. “At the same time, we hope it inspires museum visitors to see that neighborhood in a new way. The DIA belongs to everyone in the region, and this project creates new opportunities for those connections.”

Library Street Collective represents Swoon, and is facilitating the DIA and Jefferson-Chalmers projects.

An opening event for Thalassa at the DIA will take place in early October, and Swoon will also present an interactive exhibit at Library Street Collective from Oct. 8 to Dec. 3.