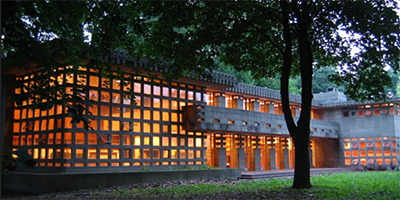 A replica of the Frank Lloyd Wright-designed Turkel House in Detroit, made with 50,000 Lego pieces, will be unveiled Thursday at The Robot Garage in Birmingham.

“Detroit is known around the world for its incredible architectural treasures built by Albert Khan and others,” says Sarah Jacobs, founder of The Robot Garage. “We find that every time a child builds an iconic structure from Lego, or sees that work built by an artist, it resonates with them. Lego seems to bring architecture down to a scale that kids connect to in really personal ways.”

Troy resident Michele Van Hecker, a graduate of Kettering University in Flint who worked in the automotive industry for 35 years, designed the Lego house. The project took her more than 2,000 hours spread over two years to complete. Van Hecker started creating the Lego installations 40 years ago, and has used about 1.3 million pieces for her creations.

The Lego house has special lighting as well as hundreds of Lego miniature figures. The installation also features gardens and the scene of a party, designed to recreate the home’s history, which was the site of many social and cultural events.

The real 4,300-square-foot Turkel House, located in 2760 W. Seven Mile Rd. in Detroit’s Palmer Woods neighborhood, was built in 1955. The home was built for Dorothy Turkel.

The installation will be unveiled Thursday evening at The Robot Garage’s Birmingham location at 637 S. Eton St. in the city’s Rail District.