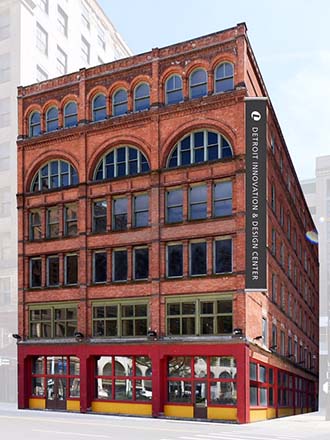 Southfield-based automotive supplier Lear Corp. has purchased a building in Detroit’s Capitol Park with plans to transform the six-story structure into a design and innovation center. The building, located behind the Westin Book Cadillac Detroit, is scheduled to open next year.

“Detroit is returning to its roots as a leader in manufacturing innovation,” says Detroit Mayor Mike Duggan. “Lear’s decision to locate this new hub in Capitol Park is another in a series of recent similar investments in our city and yet another example of Lear’s strong commitment to Detroit.”

Lear acquired the 35,000-square-foot building, located at 119 State St., from Bedrock Real Estate Services. The nearly 130-year-old building, once home to the Brown Brothers Cigar Manufacturers, will include Lear executive satellite offices, conference rooms, a non-automotive business incubator, offices for a think tank, an art gallery, and a rooftop garden.

“We plan to leverage the rapidly developing infrastructure in the central business district as well as the concentration of arts, science, and technology assets in the Capitol Park area to take our seating and electrical businesses to the next level,” says Matt Simoncini, president and CEO of Lear.

Simoncini says Lear will collaborate with students and faculty from the College for Creative Studies and Wayne State University’s College of Engineering to produce car seating and vehicle interiors and expand its electrical distribution systems and capabilities, including connected car and alternative energy vehicle applications.

Earlier this month, the automotive supplier acquired the historic Hemmeter Building in downtown Detroit’s Paradise Valley (formerly Harmonie Park). Mel Stephens, senior vice president of communications and facilities at Lear, says the renovation of the structure is underway and the property will serve as an administrative center. There was no timeline for when the renovation will be completed.

The deal of the building in Capitol Park marks Bedrock’s first building sale. Since 2011, the real estate firm and its affiliates have invested more than $1.8 billion in acquiring, renovating, and developing more than 80 properties in downtown Detroit.