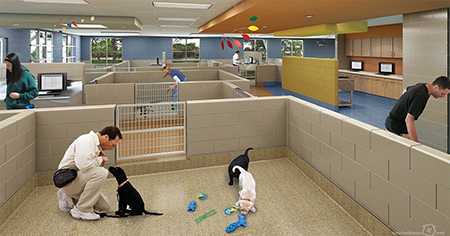 Leader Dogs for the Blind today announced plans to spend $14.5 million to update its kennel in Rochester Hills into a space with training centers, breeding areas, and a veterinary clinic.

“The Canine Development Center represents the best standard for ‘ready to learn’ dogs with open concept housing and training areas that allow the dogs to interact more with each other, our staff, and volunteers,” says Sue Daniels, president and CEO of Leader Dogs for the Blind.

Daniels says the organization has raised $12.3 million for the project, and is working to raise the final $2.2 million needed to complete the center next year.

She says the kennels in the new canine area, at 1039 S. Rochester Rd., will be two a half times larger than the current kennels and offer open sight lines for the dogs. The area will feature 255 kennels, an open area for play, and air conditioning.

Daniels adds the new facility will offer a breeding area featuring separate housing and added space for litters. The veterinary clinic will also be expanded and equipped with enhanced technology.