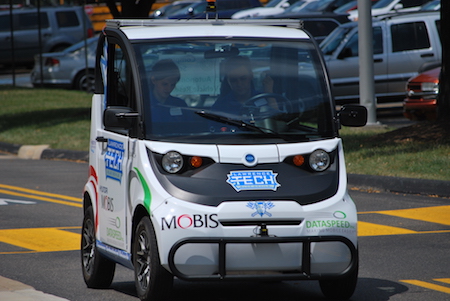 Hyundai MOBIS turned over the vehicle’s keys to LTU Provost Maria Vaz and C.J. Chung, professor of computer science, during a campus ceremony last week. LTU computer science students have already won an international award with the vehicle, following development of software that allows the car to operate autonomously.

After winning the competition, LTU team members began reprogramming the vehicle to serve as an autonomous taxi on campus. It’s been renamed ACT, an acronym for Autonomous Campus Transport/Taxi. The university of planning to introduce level three autonomy, allowing both hands and eyes to be off the road, by Aug. 2018.

LTU is a private university founded in 1932 that offers more than 100 programs through the doctorate level in its Colleges of Architecture and Design, Arts and Sciences, Engineering, and Management.