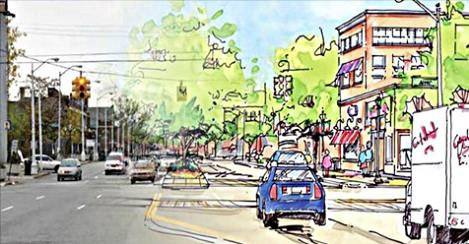 Construction will begin this month on East Jefferson Avenue, in the Jefferson-Chalmers neighborhood on Detroit’s east side, to install five landscaped islands as well as bicycle lanes.

“The Jefferson-Chalmers intersection had one of the highest number of vehicle/pedestrian collisions along east Jefferson Avenue,” says Joshua Elling, executive director of Jefferson East Inc, a nonprofit that works to attract businesses and promote the East Jefferson Corridor. “These improvements will not only make it safer for pedestrians, but work to help attract new businesses to the historic Jefferson-Chalmers business district and continue the revitalization of Detroit.”

Jefferson Avenue will remain open during the construction that will start in the middle lane, between Lakewood Street and Alter Road and is expected to be completed in mid-June. Later this year, the bike lanes and a parking lane will be added.

The Jefferson-Chalmers Neighborhood is a historic business district that was listed on the National Register of Historic Places in 2004. The East Jefferson Corridor has seen new businesses open within the past few years, including Rose’s Fine Foods, a popular diner, and a coffee shop.