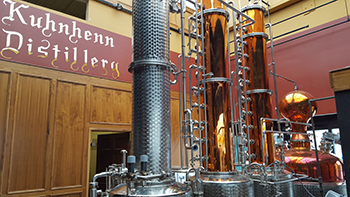 Warren-based Kuhnhenn Brewing Co. is expanding its operations later this month with the opening of a taproom in Clinton Township that also offers full-scale production and distribution space.

“There’s a lot of craft beer drinkers (in Macomb County) but there are not a lot of options for them,” says Jon Piepenbrok, vice president of marketing and sales for Kuhnhenn Brewing Co. “There’s starting to become more but we want to help elevate the craft beer scene in Macomb County even more than it already is — we want to be more of a part of that.”

Piepenbrok says the brewery, to be located at 36000 Groesbeck Hwy., is about twice the size of the Warren taproom and offers more space for packaging and shipping and will open Feb. 29.

“We needed enough space and the whole Groesbeck corridor is very conducive to shipping since this is a large scale production and packaging operation,” Piepenbrok says. “It would be a lot easier for a lot of our wholesalers to get trucks in and out of here and there’s close proximity to I-94.” 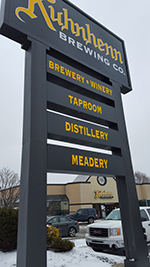 He says the Clinton Township taproom, located in a renovated 45,000-square-foot former home and garden center, offers 280 seats, twice that of the Warren location. The taproom also offers a full kitchen to complement the house-made beer, wine, mead, and distilled spirits.

“It’s a very simple menu because the main focus is always going to be about the beer and the other beverages that we make,” Piepenbrok says. “We’re working with some other local vendors and we’re doing artisan sausages and sticking with the German beer hall theme, but kicking it up a notch so to speak.”

He says options include charcuterie and cheese boards, sandwiches, and small plate items to share. Piepenbrok says the original taproom, located at 5919 Chicago Rd. in Warren, will remain open and continue to produce small-batch beer.