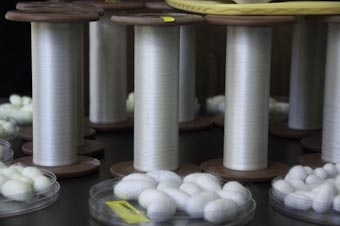 Ann Arbor’s Kraig Biocraft Laboratories today announced it has developed a strain of genetically engineered silkworms that better match the physical properties required for applications in protective textiles. The change is part of the company’s work with the U.S. Army.

The new cloth was created in response to input from the Army and is based on requirements for antiballistic applications. Kraig and the Army are in their second phase of development. Kraig delivered Dragon Silk shootpack panels to the Army this summer.

“When the Army chose to award the second phase of this project, we knew that we were given a great opportunity to prove the power of our technology and our approach using silkworms,” says Jon Rice, COO of Kraig.

“Today, we’re thrilled to announce that our work was a success and that we now have a line of silkworms that produce a recombinant spider silk better matched for the demands of protective textile applications. We expect this new strain will play a critical role in our expansion and commercialization of spider silk far beyond the market for bulletproof vests.”

Kraig plans to scale up production of its new spider silk fiber at its domestic facility to fulfill the second phase deliverables to the Army.