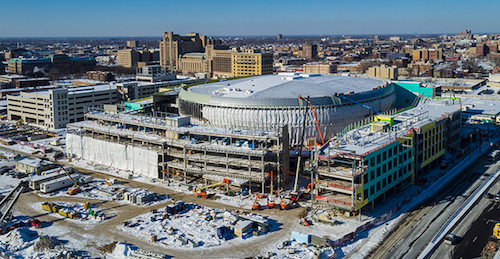 With eight months until the Little Caesars Arena is scheduled for completion, Olympia Entertainment in partnership with Detroit Live Nation today announced metro-Detroit’s Kid Rock will perform the first four concerts at the new arena on September 12, 13, 15, and 16.

The “All Summer Long” singer made the announcement during a media conference at the arena’s construction site this morning. He was joined by representatives from the Red Wings and Pistons franchises, underlining the venue’s status as a premier destination for both sports and entertainment.

“With this world-class, Michigan-made, Detroit built facility, it is only fitting that we would welcome a Michigan-made, Detroit built entertainment icon to perform the very first shows here at Little Caesars Arena,” says Christopher Ilitch, president and CEO of Ilitch Holdings, Inc. “From the beginning, we’ve planned The District Detroit and Little Caesars Arena to have the greatest possible positive impact on our community. Kicking off the grand opening of Little Caesars Arena with four shows from a worldwide star and Detroit icon like Kid Rock is a terrific way to launch The District Detroit.”

Located at Woodward Avenue and Henry Street, the $732.6-million Little Caesars Arena will offer 20,000 seats for hockey, 21,000 seats for basketball, and 15,000 to 22,000 seats for concerts. District Detroit, which encompasses a 50-acre area around the arena, is expected to be one of the largest sports and entertainment developments in the country.

Tickets for the shows will go on sale Friday, Jan. 27 at 10 a.m. and can be purchased here.