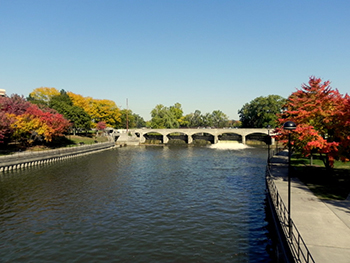 As Flint’s water crisis garners more national attention, the president of Kettering University in Flint sent a letter to parents of the school’s students and alumni explaining the origins of the lead contamination in the city’s water supply and information about who’s affected. The letter was made publicly available.

Robert McMahan, president of Kettering University, said in his letter dated Monday that Kettering’s campus water is safe and the entire water supply of Flint has not been contaminated with lead.

He said the water from the Flint River that was used as the city’s water source from April 2014 to October 2015 was not contaminated with lead.

“The contamination, where it occurred, was due primarily to interactions between treated river water and lead supply lines in the distribution system, particularly in lead lines connecting individual houses to local water mains,” McMahan said. “This is not a global problem with the water, but a problem with how that water — after treatment — interacted with some pipes and other elements of the city’s distribution system.”

He said the presence of lead contamination in the water supply was not uniform across the entire municipal water system, and not all areas of the city were equally affected by it. McMahan said the municipal water infrastructure that supplies Kettering is relatively modern, but the university has taken steps to ensure the water supply is lead-free.

At Tuesday’s State of the State Address, Michigan Gov. Rick Snyder apologized to the residents of Flint and promised to release all of his emails sent and received in 2014-2015 regarding the crisis. President Barack Obama signed an emergency declaration last week that made $5 million in federal assistance available to assist those affected.