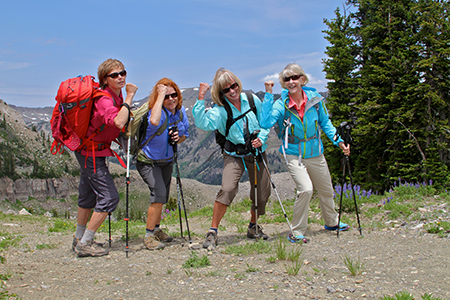 Film maker Keith Famie doesn’t shy away from asking the hard questions, as evidenced in the first episode of the 13-part series, Embrace of Aging: The Female Perspective of Growing Old, set to premiere in October on Detroit Public Television.

“It opens up with women answering the question, ‘How old are you?’” says Famie, a 10-time Michigan Emmy award-winning director/producer in Novi. “Everyone asked me, “How are you going to approach that? You can’t just ask that question of a woman.’ And I said, ‘I’m just going to do it. I think it’s relevant.’”

Of the women highlighted in the series — who range in age from 40 to 105 — some answered truthfully, while others explained why they don’t answer or why they lie when they do. But in the end, the point of the series isn’t about the ages of the women interviewed. It’s about their experiences handling the aging process.

“We have women in their 70s who are hiking the mountains of Jackson Hole, where some of us guys in our 50s would be like, ‘Oh my god. Can you just slow down a little bit for us?’” says Famie, who worked on the film and series with co-executive producers Thomas Rau and Russell Ebeid. “We have a 73-year-old woman who lost 173 pounds from the ages of 67 to 73, who’s now participating in triathlons. And then we have a woman who shows us what it’s like to be going through stage-4 cancer (following a separation with her husband), so it’s just her and her daughter.”

And as Famie found when working on the men’s Embrace of Aging series, the most important message from the series is common sense: “How I live my life today will determine how I age tomorrow.”

He says that those who have seen the project’s theatrical cut — a 74-minute film that premiered in May at the NYIT Auditorium on Broadway in New York City — have been inspired by the stories shared, with some considering it a “wakeup call.”

Like the film, each 30-minute episode will close out with the song, Look Beyond Your Horizon, performed by Michigan singer and songwriter Jill Jack and the Detroit Women’s Project. “(Jill Jack) wrote it in the shower and called me (about it) three weeks before we were ready to go to New York for the premiere. I said, ‘Jill, you’re killing me, we’re closing down the edits.’ But I asked her to send it to me, and it turned out to be perfect — it’s really fantastic.”

The series will begin airing on Sundays starting Oct. 12 on DPTV. For more information, click here.