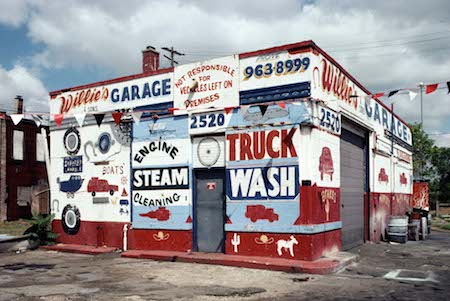 After five months parked outside Two James Spirits in Corktown, the Thai-inspired food truck Katoi is turning off its engine to focus on its latest venture: a brick-and-mortar restaurant expected to open this spring.

The new location is less than a minute away, in what previously housed the former Willie’s Garage at 2520 Michigan Ave.

“We’re taking our truck business and parking it permanently at the garage,” says Courtney Henriette, co-partner with Chef Brad Greenhill, and Philip Kafka.

The new space will be a change in business model for the Thai-inspired eatery, which has been serving as the food component to the Two James tasting room since last August. Customers currently order from a service window inside the distillery.

“On busy nights, people wanting to eat may have difficulty finding seats because the room is filled with Two James patrons,” Henriette says. “We are guests inside someone else’s home. This (new location) will be a whole different game, because we’re actually making a space for people to eat our food.”

As a full service bar and restaurant, the new Katoi restaurant will swap out the paper boat plates and plastic-ware with dishes and flatware. There will be seating capacity for about 50 to 60 people in the dining room and 20 people in the parlor/pub area.

The food offerings will build upon the food truck’s rotating menu, which counts Thai fried chicken — served with green papaya slaw, sweet chili garlic, and coconut milk ranch — among its staples. Despite the menu’s obvious inspirations, Katoi is not a Thai restaurant, Henriette says.

“We use a Thai palette, but we’re really locally based in the sense that our menu changes along with the seasons,” she says. “If there is one thing (we) aim to convey, it is our dedication to making delicious food. The objective of the restaurant is to create a comfortable space for people to have incredible food experiences.”

The team is working with a friend/architect out of New York to renovate the 1,900-square-foot building, which is under construction. Once open, the four-person Katoi staff will likely to expand to 20, Henriette says.

And it’s not as though Katoi’s owners will be handing in their food truck keys just yet. Pending licensing approvals, the partners hope to implement the vehicle within the new space, potentially using it as a second, outdoor kitchen in the warmer summer months.

In the meantime, Katoi will host a series of dinners around the city to keep the momentum going, Henriette says. Guests to Two James Spirits still have two days left to take advantage of the food truck component, which will be open 5 to 10 p.m. today and 5 to 11 p.m. Saturday.