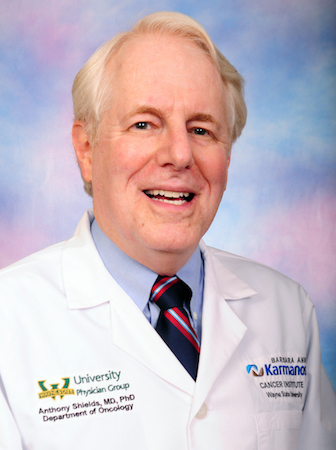 Findings from a 10-year, global study involving 12,834 stage three colon cancer patients on adjuvant chemotherapy were released today by the Karmanos Cancer Institute, indicated that patients with a lower risk of cancer recurrence received three months of chemotherapy versus the standard six-month treatment did similarly well.

The findings were presented at the 2017 American Society of Clinical Oncology (ASCO) annual meeting this week. Dr. Anthony Shields, associate center director for clinical sciences at the Barbara Ann Karmanos Cancer Institute in Detroit was a co-chair on the North American study, and believes the findings could change the standard of treatment for stage three colon cancer patients moving forward.

“Anytime scientists can lower the toxicity for cancer patients and still get the intended results from the treatment, it’s exciting news,” says Dr. Shields. “For some stage 3 colon cancer patients, six months of chemotherapy will still be the recommendation. However, based on study findings, we estimate that for about 60 percent of patients with low-risk colon cancer, representing approximately 20,000 patients annually in the United States and 400,000 annually worldwide, the same benefits can be achieved with three months of treatment instead of six months, decreasing the side effects and risks, such as nerve damage, that can be attributed to continued chemotherapy.”

The collaborative study began in 2007 and is currently the largest colon cancer stud of its kind, enrolling nearly 13,000 stage three colon cancer patients in six phase three trials concurrently in North America, Europe, and Asia. The study followed patients for a median of 39 months after surgery for stage three lymph node-positive colon cancer. Since 2004, the standard treatment following surgery has been a combination of chemotherapies over six months, though patients in the study were given doses for three months. In a subset of patients categorized as low-risk for cancer recurrence the report indicates “almost no disease-free survival difference between a three month versus six-month course of therapy.”

Dr. Shields and other scientists involved are currently in the process of writing the study results in a paper, with the goal of having it peer reviewed and formally published.

The full findings of this study can be read here.