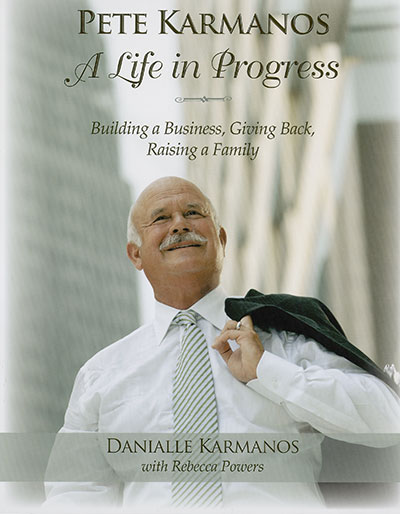 At a release party Tuesday evening at the Detroit Mercantile Co. in Eastern Market, Pete Karmanos Jr., former chairman and CEO of Compuware Corp. and founder of the Karmanos Cancer Institute, touched on recent events surrounding the cancellation of a consulting deal he had with the company he co-founded in 1973.

Recounting a date he was on in the early 1960s, at a Top Hat restaurant along Grand River near Middle Belt on Detroit’s west side, he saw a group of bullies shoving a boy around. After stepping out of his car and yelling at the bullies, they turned on him.

“I sort of feel like that this week,” Karmanos said. “I’m never at a loss for words. You all have been reading the newspaper this week; a couple of (Compuware) board members are here. I do feel strongly about things.”

Two weeks ago, at a public event, Karmanos made critical comments about Compuware’s management team. On Friday, Compuware canceled his $600,000-annual consulting contract, which included an office, health insurance, and the use of two company vehicles. The contract began on March 31, when he retired as chairman.

Karmanos went on to thank the team that produced the book, Pete Karmanos, A Life in Progress, written by his wife, Danialle Karmanos, along with former Hour Detroit editor Rebecca Powers (writer Doron Levin also contributed early on with the project). The 106-page tome, which traces Karmanos’ upbringing in Detroit, working at his family’s restaurant, Pete’s Place, as a teenager, and his corporate career, the owner of the NHL Carolina Hurricanes said he felt honored by all of the attention.

“I really, really appreciate the job Danialle and all of those other people did,” he said. “Doron had to start this with me, and he had to put up with me, and then the rest of the team took over. It’s a remarkable book … you can tell it was done by real professionals and I am so thankful to Danialle for saying all of those wonderful things.”

The book, which includes forewords from former Detroit Mayor Dennis Archer and Danialle Karmanos, traces the founding of Compuware, its rise through the early years of the computer industry, the work leading up to Y2K, and the development of Compuware’s headquarters in downtown Detroit.

It also describes his charity work, including the launch of the Karmanos Cancer Institute, the Stanley Cup win with the Hurricanes, a legal battle with IBM, his friendship with Kid Rock, and the importance of family.

Published by Word Karma Books in Detroit, the book, priced at $44.95, is available at The Detroit Shoppe in downtown Detroit and at the Somerset Collection in Troy. a A book signing will be held at the downtown store (1201 Woodward) from 11 a.m. to 2 p.m. on Thursday.

Through Sunday, 100 percent of the proceeds from the book will benefit the Karmanos Cancer Institute. Following that, the proceeds will be split evenly between the Institute and Danialle Karmanos Work It Out, a nonprofit organization that fights childhood obesity.