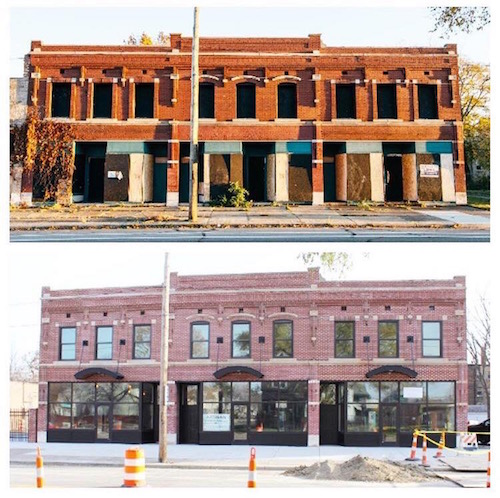 Resurget Cineribus, a development company based in Detroit, renovated the abandoned structure. The partners — Alex DeCamp, Reimer Priester, Charles Dabrowski, and Mark Seppala — named the company after the city’s motto written by Fr. Gabriel Richard following the 1805 fire: Speramus meliora; resurget cineribus (Latin for “We hope for better things; it will arise from the ashes.”)

“Detroit’s comeback will be sustainable if we continue to work together and help those who live and work in neighborhoods like West Village, “says Jamie Dimon, CEO of JPMorgan Chase, who attended today’s ribbon cutting along with Mayor Mike Duggan. “This collaborative spirit is creating economic opportunity in Detroit’s neighborhoods and encouraging others to invest.”

In addition to the Motor City Match grant, Chase and Capital Impact loaned $1 million to the project, as part of its $30 million Detroit Neighborhoods Fund. The purpose of the fund is to provide financing for multi-family residential units, mixed-use real estate, and grocery stores.

“This new development continues the tremendous momentum we are seeing across Detroit,” says Melinda Clemons, senior loan officer for Capital Impact Partners.  “As the first in a coming series of projects that will radiate out from development in central Detroit to other resurgent neighborhoods, the Garland Building is a true catalyst for a new wave of recent revitalization efforts in this part of the city.”