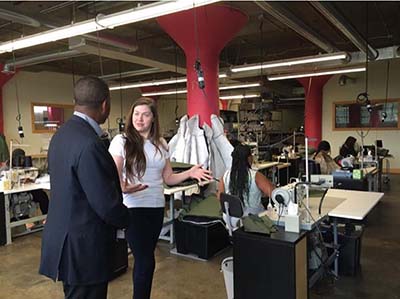 Plymouth Township-based Johnson Controls Automotive Seating has partnered with the Empowerment Plan, a Detroit nonprofit that manufactures coats that transform into sleeping bags for the homeless, to help reduce costs and boost distribution efficiency.

“What used to take over five hours to make one (coat) now takes about an hour and 45 minutes on average once somebody learns how to sew and is able to make it,” Scott says.

“We looked at their patterns, their operations, how they put things together, and their supply base,” Michalak says.  With new designs, the coats are being procedure with less fabric, saving the nonprofit money.

“It’s been a huge challenge to get (the coats) out there,” Scott says.

The Empowerment Plan has distributed more than 10,000 coats over the last three and a half years to 30 states, six Canadian provinces, and to New Zealand, Australia, and France.

Scott also says the Empowerment Plan is also working with companies such as Johnson Controls Automotive Seating to hire homeless men and women.

“A lot of people really know us as the coat people,” Scott says. “The biggest impact that we’ve made comes from the employment that we do. At the end of the day, the people we hire makes what we do great.”

She says the Empowerment Plan will hire 20 more people from homeless shelters next year, and is working towards adopting a one- to three-year employment model, with graduates moving on to different companies at the end of their time at the Empowerment Plan.