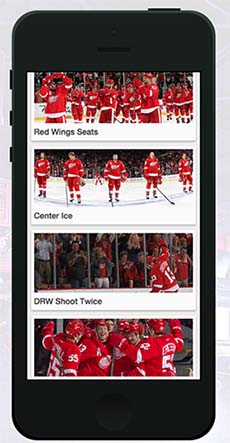 “As we celebrate our final two seasons at The Joe and prepare for an exciting new chapter in the Detroit Events Center, we’re always looking for new ways to improve and show our fans how much we appreciate their continued loyalty,” says Tom Wilson, president and CEO of Olympia Entertainment.

Other additions include a new concession stand, called Red Hot Wings, featuring buffalo-style wings, boneless wings, chicken tenders, and French fries; a new point of sale system for every concession stand and bar that accepts all major credit cards; and new LED lighting for the scoreboard.

Wilson says season ticket holders, along with single-game buyers, will be able to access and transfer their tickets wirelessly on their smartphone. In turn, fans will be able to present their mobile ticket to a Joe Louis arena attendant to scan at the entrance.

Ticket holders will also be able to purchase ticket upgrades and Red Wings experiences when attending a game through the Red Wings mobile app. Free high-speed, public Wi-Fi is now available at all games.

For the 2017 season, the Red Wings are scheduled to play at the new Detroit Events Center now under construction at the northwest corner of I-75 and Woodward Ave. in Detroit.