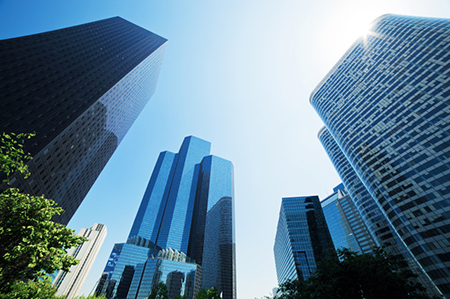 As the economy recovers with more job growth across the region, a new real estate report shows the office vacancy rate dropped 21 percent in the first quarter — a rate not seen since 2006.

“The metro Detroit economy continued to improve steadily through January, with payroll employment growing 2.5 percent over the past year to reach 1.9 million jobs,” says John DeGroot, author of the report and vice president of research at Newmark Grubb Knight Frank, a New-York City commercial real estate firm with an office in Farmington Hills.

Despite completed or upcoming relocations by Fifth Third Bank and Blue Cross Blue Shield to downtown Detroit, Southfield’s vacancy rate is at a seven-year low.

In Detroit’s central business district, the office vacancy rate fell to 20 percent during the first quarter on 2015. A move by Molina Healthcare of Michigan from Troy to a 30,000 square foot office space in downtown Detroit made up the majority of the CBD’s 97,000 square feet of absorption.

Additionally, the Detroit downtown area is projected to see one of the lowest vacancy rates of all major metro submarkets in the region within the next year due to the upcoming relocation of Meridian Health, which co-purchased a 1.1 million-square-feet building at 1 Campus Martius with Quicken Loans in late 2014.

“In 2011, the central business district had the worst vacancy are in the nation at 35.7 percent,” DeGroot says. “Four years later, companies have absorbed more than 1.8 million square feet in the district, pushing the vacancy rate down 15.4 percent points.”

In the Troy, Livonia, and Farmington Hills office markets, vacancy rates fell between 15 and 25 percent, with 165,000 square feet of space absorbed between the three markets.

In terms of job additions, the report saw manufacturing as the second largest-year-over-year growth, with employment expanding 4.3 percent in the past 12 months. Construction, meanwhile, saw employment rise 8 percent over the past year. The construction industry is expected to lead employment growth in 2015 due to the new Detroit Red Wing Ice Arena and expanded commercial development.