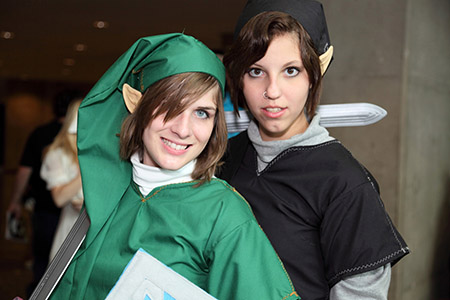 Youmacon — similar in theme to most major Comic Cons, and named for the Japanese word youma, meaning demon or ghost — is the 10th largest anime convention in the U.S., and the fastest growing, says Morgan Kollin, chairman and founder of Youmacon Enterprises/Defying Conventions.

“After spending nearly four years getting the very first Youmacon up and running, to now be marking a decade of success with tens of thousands of attendees is truly more than I could have imagined,” says Morgan Kollin, chairman and founder of Youmacon Enterprises/Defying Conventions, noting that he expects to see a nearly 30 percent increase in audience turnout to this year’s event.

Highlights at the expo — to be held Oct. 30-Nov. 2 at Cobo Center and the Renaissance Center in downtown Detroit — include a charity supporting Detroit’s Cornerstone Charter Schools, a live action Mario Party, video game and table top gaming rooms, and a 100,000-square-foot marketplace with more than 250 anime and collectibles vendors.

Unlike some Comic Cons, the more than 30 celebrity guests on-site will sign autographs and take photos for free, Kollin says.

While the majority of visitors for the event come from outside the metro Detroit region, planners anticipate this year’s convention will draw from a more local fan base thanks to a greater focus on marketing within southeast Michigan, Kollin says.

“We’re doing our best to keep things in the community,” he says. “We really want to keep pushing things forward for metro Detroit.”

For more information about the event — which is free Thursday but requires a pass Friday through Sunday — visit youmacon.com.