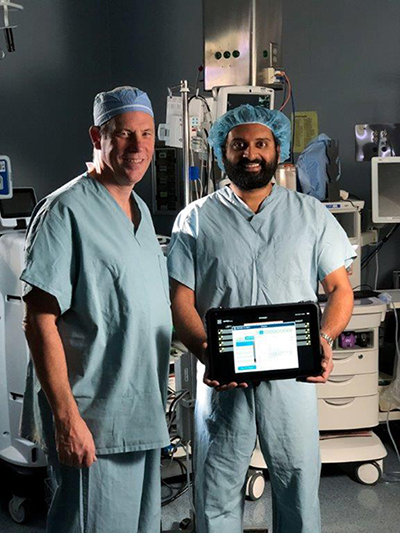 Henry Ford Allegiance Health in Jackson is the first hospital in the country to use Generation 2 of the Sentio neuromonitoring system, most often used in minimally invasive spine surgery. It was originally developed by Dr. Stephen Bartol, an orthopedic spine surgeon at Henry Ford Health System.

“Henry Ford Allegiance Health was given first access to this upgraded system because of our high volume of use, positive patient outcomes, and the strong relationship we have built with the developer of the technology since its inception,” says Dr. Amritraj Loganathan, a neurosurgeon at Henry Ford Allegiance. “This advanced technology allows me to offer my patients the advantages of minimally invasive spine surgery, which typically results in faster recovery, less blood loss, and a shorter hospital stay.”

The Sentio neuromonitoring system provides the neurosurgeon with feedback on the location of nerves in real time through the use of adhesive sensors that are applied to the patient’s skin. This enhances precision and reduces the risks of damaging patients’ nervous systems.

“The Sentio system’s capabilities for nerve localization are critical, especially in procedures where motor nerves are at risk,” says Loganathan. “Patient safety is our top priority, and this next generation of the Sentio system supports this better than ever.”

Henry Ford Health System is based in Detroit and is a six-hospital system. It provides both health insurance and health-care delivery.