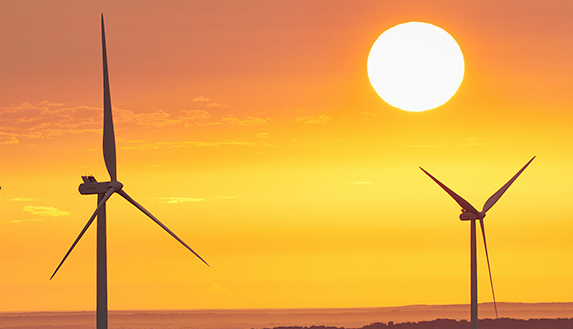 CMS Energy in Jackson plans to add two new wind energy parks to its portfolio that will produce up to 250 megawatts of clean, renewable energy.

“CMS Energy is committed to our triple bottom line of people, planet, and prosperity, and we are excited to support all three by increasing the renewable energy we supply using wind power,” says Patti Poppe, president and CEO of CMS Energy. “We are showing it is possible to provide affordable, world-class products and service to customers while being responsible corporate citizens.”

Consumers Energy, the principal subsidiary of CMS Energy, has entered into an agreement to own, construct, and operate the Gratiot Farms Wind Project being developed by Tradewind Energy, one of the largest independent wind and solar project development companies in the country.

The project is located in North Shade and New Haven townships and is expected to include up to 75 wind turbines and have a capacity of up to 150 megawatts of wind energy once completed.

Consumers Energy will acquire a development package and then manage the wind farm construction through a development asset acquisition agreement. The purchase requires approval from the Michigan Public Service Commission.

Tradewind Energy will continue to perform studies, secure permits, acquire real estate, and carry out other functions needed to develop the project up until the construction stage. Consumers Energy is expected to assume ownership in May 2019 and will be responsible for constructing and operating the project when it goes into commercial operation, which is expected in late 2020.

CMS Enterprises, a subsidiary of CMS Energy, has signed an agreement to purchase the 105-megawatt, 10,000-acre Northwest Ohio Wind project once construction is nearly completed. The project is under construction by subsidiaries of Starwood Energy Group Global. CMS Enterprises will then finish construction, expected by fall 2018, and own and operate the facility going forward.

“CMS Enterprises’ ownership of the Ohio project enhances the longstanding relationship between GM and CMS Energy,” says Rob Threlkeld, head of global renewable energy for GM. “The Ohio project will play a key role in offsetting carbon emissions from seven GM plants in the midwest and help enable GM to use renewable energy to power 20 percent of our facilities globally, demonstrating GM’s commitment toward meeting our goal of 100 percent renewables by 2050.”

Consumers Energy announced clean energy goals earlier this year, including reducing carbon emissions by 80 percent and no longer using coal to generate electricity by 2040. Consumers Energy also announced plans to increase renewable energy to 37 percent by 2030 and 43 percent by 2040 through additional investments in wind and solar energy.