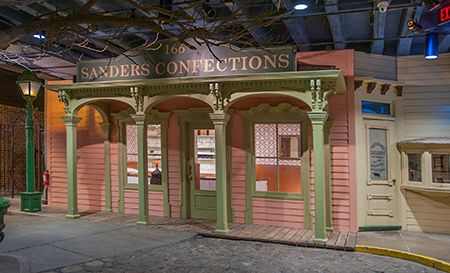 Thursday marks the 313th anniversary of Detroit’s founding by the French explorer Antoine de la Mothe Cadillac, but the festivities to celebrate the day have already begun.

The Detroit Historical Society, for one, kicked things off this past weekend with a procession of electric guitarists throughout Midtown on Saturday. The festivities continue this week with extended hours (9:30 a.m. to 5 p.m.) and exhibit-themed programming at the Detroit Historical Museum.

“It goes back to the great old days of Ma Bell (the companies led by the Bell Telephone Co.), when Detroit was assigned the area code 313,” says Bob Sadler, spokesman for the historical society. “It’s become part of the city’s shorthand over the decades. And as both the preservers and the presenters of Detroit’s history, we just wanted to be a focal point for the city’s birthday celebration.”

As part of that celebration, the Detroit Historical Society — which raised more than $21 million through its five-year Past > Forward fundraising campaign that ended June 30 — is also hosting free Detroit-related film screenings at the museum each day this week at 1 p.m.

To learn more about the Detroit Historical Society’s celebration plans for the week, click here.

On Thursday, the historical society is teaming up with Forward Arts, DIA Founder’s Junior Council, Detroit Young Professionals, and Preservation Detroit, for a party that will bring out area food trucks and entertainment by Motor City Soul Club around the Detroit Historical Museum. For more information about the event, to be held from 6 p.m. to 10 p.m., click here.

“There will be great food and great music,” says Megan Curoe, co-founder of the Friends of the Matrix Center, which is hosting the event. “A party on a rooftop in Detroit is rare — everybody wants to be a part of it. I’m sure it will be a cool, fun night in the ‘D’ and the more people we attract, the more people will learn about Matrix Human Services and the wonderful work they are doing throughout the community.”

To purchase tickets, which are $45 and benefit youth programs at the Matrix Human Services Center, visit matrixhumanservices.org.

Over at the Firebird Tavern, at 419 Monroe St., the Detroit Metro and Visitors Convention Bureau will host a Detroit Birthday Tweetup from 6 p.m. to 8 p.m. The “tweetup,” a sort of networking event that encourages participants to post on Twitter while at the event, will include Detroit trivia and a panel discussion about the city’s comeback. For more information, or to RSVP for the event, click here.

The Detroit Experience Factory also has plans to celebrate the city’s birthday — in their case, via a bar tour.

“We do these bar tours every month and added this special one for the birthday,” says Jeanette Pierce, spokeswoman for D:Hive and the Detroit Experience Factory, which is hosting the three-hour event. “They’re a great way to educate people about what’s going on in Detroit, past, present, and future.”

Earlier in the day, D:Hive will host a free pizza party from noon to 2 p.m., Pierce says.

To register for the tour, visit weknowdetroit.com. For more information about the pizza party, click here.