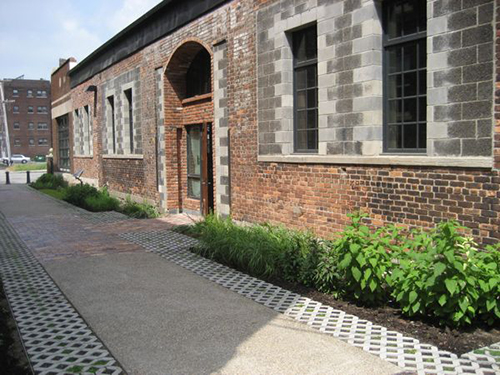 Shinola — the Detroit-based designer and manufacturer of watches, bicycles, leather goods, and home furnishings — is asking people to write positive messages on social media platforms using the hashtag #SayNiceThings in a campaign starting on Saturday.

For every #SayNiceThings post, Shinola employees will write the message on a paper embedded with seeds. The seed paper will be planted throughout Detroit to support the Green Alley Project, a program designed to turn alleys into urban oases.

The best example of the project, spearheaded by Midtown Detroit Inc. and neighboring businesses, is in an alley between Canfield and Prentice, just east of Second Avenue. Businesses along the alley include Motor City Brewing Works and the Green Garage. Shinola’s Detroit store, which opened last summer, is located on Canfield, between Cass and Second.

“Ultimately, it is symbolic to show that planting nice things begets nice things and contributes to the beautification of Detroit,” says Bridget Russo, spokeswoman for the campaign and Shinola’s marketing director. “Often, folks take to the Internet with unkind words. However, we (would) like to shift that paradigm and encourage people to say nice things, and those good intentions will hopefully generate further positive sentiments.”

Like many global advancements, the movement started in Detroit. In the 1970s, the Say Nice Things About Detroit campaign was created Emily Gail, a former small business owner in downtown Detroit. During a time of economic struggle, many businesses were closing, and Gail launched the campaign to uplift Detroit’s spirits.

Her former store, called Emily’s, was located at Shelby and Congress and sold a variety of Detroit-themed clothing, retail goods, and ice cream. Today, Gail lives in Hawaii, and vacations in Detroit.

“As always, it starts at home,” Russo says. “With all the recent negative press around Detroit, we always encourage visitors to say nice things about Detroit. We want to take that a step further and encourage nice words of any kind worldwide.”

Shinola’s flagship stores in Detroit and New York will participate in the campaign by encouraging customers to write positive messages on seed paper. Each store will have a “growing installation” that incorporates those messages as well as those posted online.

For more about the project, visit shinola.com/saynicethings.