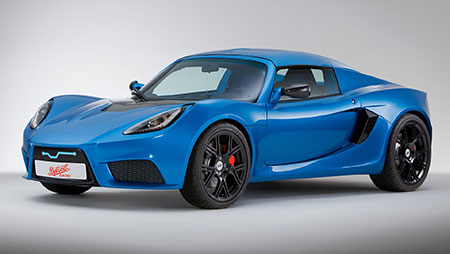 Earlier this year, Detroit Electric announced that production of the SP:01 — touted to be the fastest battery-electric vehicle on the market — would take place in Wayne County. But while manufacture of the electric sports car is set to begin by year’s end, it won’t be happening in Michigan.

Instead, the automaker will build the model in the Netherlands and, in the meantime, try to secure Federal Motor Vehicle Safety Standard Certification in order to begin production in the United States. The automaker also still needs to finalize an agreement for a manufacturing facility in Wayne County.

In a statement, the company’s CEO Albert Lam said, “We are Detroit Electric, not London Electric. Our commitment to the city of Detroit, the state of Michigan and the United States is as strong as it ever was. While there have been some delays in our plan to start production in Detroit, many vehicle programs experience some form of delay.”

Lam believes the change in manufacturing locations is just a small hiccup in the automaker’s vision for a world full of electric cars. As industry observers have witnessed, any number of challenges can pop up in the development cycle. Fisker, another luxury electric vehicle that kicked off with a great deal of promise, closed up shop due to myriad factors, not the least of which was cobbling together a seamless global supply base.

In recent decades, most OEMs have adopted a global outsourcing strategy, turning to suppliers for all but the most critical componentry, like engines. Even so, the cost of entry is huge. A single new powertrain can cost hundreds of millions of dollars to develop, while a modern assembly plant can readily top the $1 billion mark.

Detroit Electric, on the other hand, has lined up “strategic investors” and other partners to take on production of virtually all key components, everything from the batteries and electronic control systems to what Lam calls “the boring stuff,” like chassis and body manufacturing.

While Detroit Electric originally planned to set up a small factory in Detroit to handle final assembly of the extremely low-volume sports car, it also planned to outsource most of the work on future models to any of a number of vendors who have open capacity. Officials wouldn’t say whom they were negotiating with, but two possibilities came up in a conversation with Detroit Electric management: Canada’s Magna International and Finland’s Valmet, which already has served to assemble the short-lived Fisker Karma plug-in hybrid.

Declaring the new automaker “an American company,” the Hong Kong-born Lam stressed that some final assembly operations will remain in the U.S., possibly Detroit.

The alternative approach to manufacturing might carry its risks, but automotive veteran Don Graunstadt, Detroit Electric’s head of North American operations, noted it also had key advantages in terms of launching a new company. “We would probably have to borrow $800 million to set up a conventional manufacturing operation,” Graunstadt says, adding that there would “not be enough in sales (at least initially) to support that kind of investment.”

At $135,000, the SP:01 won’t come cheap, but it’s a halo product designed to put Detroit Electric on the map, much as Tesla did several years earlier with its Lotus-designed Roadster. What will really matter are the three Detroit Electric models promised to quickly follow, including mainstream sedan and hatchback offerings targeted for late 2014 — and carrying base prices of around $32,000 to $35,000.

In all, the various executives and partners and a few “strategic investors” are expecting to kick in perhaps $50 million to $100 million to bring the realization of their dream. “There’s a bit of risk there, given the complexity of today’s cars and all the regulations you have to comply with,” says Joe Phillippi of AutoTrends Consulting. “But your capital cost is minimal. It’s just going to take careful program management to make this work.”

It’s clear that Lam, who once worked as a senior manager at Apple, was influenced by the outsourcing approach of the consumer electronics giant. But it remains to be seen if the strategy will work with a vehicle consisting of 15,000 or more parts.

Then again, if he’s right, Detroit Electric might not just plug into an emerging market for battery power but set a model that the rest of the industry won’t be able to ignore.