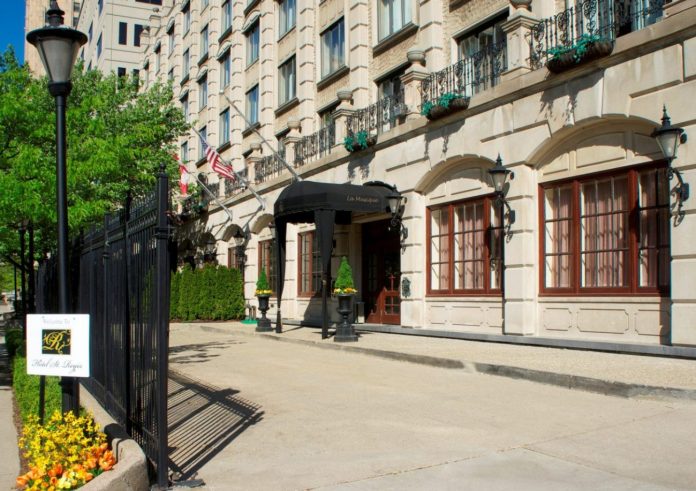 Invictus Equity Group, a Detroit-based investment company, has acquired a controlling interest in Detroit’s Hotel St. Regis. Tony Saunders, an Invictus partner, says Roy Roberts, former executive vice president of General Motors, is investing with Invictus in the St. Regis and that a previous owner of the St. Regis, the O’Neil D. Swanson Family, will continue with a significant ownership position in the hotel.

Saunders says the new ownership team plans to make an estimated $6 million in renovations to the 125-room hotel, including installing a new lobby bar, while making renovations to the restaurant, La Musique, the rooms, and the hotel conference center. Saunders is joined in Invictus with Christos Moisides, executive member of 400 Monroe Associates in Detroit.

The renovations are expected to start in the next 90 days. Invictus plans to complete a redesign of the restaurant, opening it up to the large exterior patio along West Grand Boulevard (just west of Woodward Avenue). The team is exploring the creation of a roof top patio with panoramic view of the nearby Fisher Building and downtown Detroit, as well.

“It’s a gorgeous building with a lot of history and when you look at all of the energy that is shifting into the New Center area at this time, we feel it has the potential to be an anchor institution for the area,” says Saunders. “The fact that it is located close to the last stop on the QLine adds to its attractiveness and the impact it can have on the area.  We are looking to create a dynamic experience that will keep people coming back for more.”

Architects for the renovations will be McIntosh Poris Associates in Birmingham, whose most recent projects include converting Detroit’s downtown fire headquarters into the Detroit Foundation Hotel. The general contractor is Rockford Construction in Grand Rapids (the company has an office in downtown Detroit), while Kyle Evans Design in Detroit will serve as project designer. The hotel management company will be AHC+Hospitality.

“We are excited by the potential Invictus brings to the future of the hotel,” says O’Neil Swanson, president and founder of Swanson Funeral Home in Detroit and a co-owner of the hotel. “We share Invictus’ vision for updating its facilities and believe with their involvement and leadership we will achieve the goals for the hotel that my family envisioned when we took an ownership position several years ago. We look forward to working with them.”

The Hotel St. Regis Detroit opened in August of 1966. It was designed to be an elegant, old world hotel that it could serve not only General Motors executives traveling to and from GM World headquarters, which was then located across West Grand Boulevard from the hotel, but other sophisticated travelers as well.  It is connected by skywalk both with Cadillac Place, the former GM World Headquarters, and the Fisher Building.