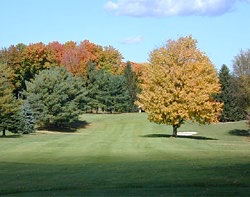 A series of upgrades is in store for the recently acquired Interlochen Golf Course, an award-winning property that Michigan PGA professional Brad Dean has assumed ownership of after serving as director of golf at Crystal Mountain Resort for the last 23 years.

The 18-hole Interlochen Golf Course is located just off of U.S. 31, seven miles from Traverse City, and plays up to 6,600 yards from the back tees. The third owner since the facility opened in 1965, Dean plans to maintain Interlochen as an affordable, public, daily fee, course with a membership component.

“It is a beautiful course with huge trees and a lot of water,” Dean says. “There are a lot of holes close together on 150 acres, but it works well. It’s a traditional course, with push-up greens that are enjoyable to play. We’re going to do some things to open up the entrance and make it more visible from U.S. 31, put up new signage, and add new billboards in the area. We want people to stop in, play, and have fun.”

Dean is currently focusing on renovating the club’s restaurant and plans to reopen it as “Bradley’s Pub and Grill” in early spring 2017.

“Interlochen is (in) a terrific community that is looking to expand its economic base and I am proud to be part of this,” Dean says. “The restaurant is currently the biggest piece because of all that we are doing. The Interlochen community needs another good restaurant, and there is already a really good golf course here.”

As a player, Dean has won multiple Michigan PGA Northern Chapter events and played in several PGA Professional Championships, qualifying to play with tour stars in the 90th PGA Championship in 2008. For Interlochen, he plans to hire a PGA professional to direct instruction and create a junior golf program.