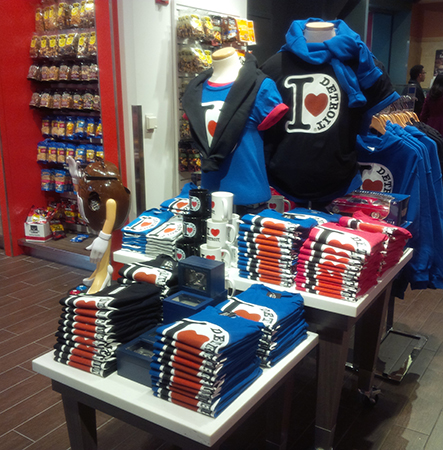 Ink Detroit, a Royal Oak-based clothing company and the official registered trademark holder of the “I Heart Detroit” products, has plans to broaden its reach beyond Detroit via its new company, Ink City.

“It’s similar to Ink Detroit, but will provide city-themed product for other major markets,” says Steve Mansour, the company’s co-founder and owner. “We already have designs done for Chicago, L.A., Las Vegas, and Miami.”

Mansour and his business partner, Paul Marcial, plan to begin marketing the new designs on their website by early April. They also hope to leverage their new relationship with Toronto-based LS Travel Retail as a way to break into retail stores in airports across the country.

The partnership has already afforded Ink Detroit access into the McNamara Terminal at the Detroit Metropolitan Airport. Starting last week, select designs — including men’s, women’s, and children’s clothing and an assortment of coffee mugs — are now on sale at the Economist store, between gates A38 and A40.

“(LS Travel Retail) also owns and operates gift shops in the airport’s North Terminal, so we hope to get our products in a few of those stores after the holidays or within the next 30 days,” says Mansour, who notes that retail is in his blood (his family owns Farmington-based leather and fur retailer Donna Sacs).

While the clothing line is expanding its horizon, Mansour says the company hasn’t forgotten about its original market and plans to continue growing its Detroit-themed line.

“We introduce one to two new (Detroit) designs about every 45 to 60 days,” says Mansour, noting the business always promotes the new launches first via social media, where the company has nearly 5,000 followers on Instagram and approximately 30,000 fans on Facebook. “We do a great job of cross promoting our brand with the retailers that carry them because without them, there is no Ink Detroit.”

IN OTHER DETROIT METRO AIRPORT NEWS, the food and beverage redevelopment program at the McNamara Terminal continues. On Monday, the facility opened a Gordon Biersch restaurant and brewery near gate A74, following the addition of a Longhorn Steakhouse, which opened earlier this month near gate A66.

In January, the airport will open a Max & Erma’s near gate A18, and officials expect to open a P.F. Chang’s, to be located across from gate A38, by the end of the first quarter.