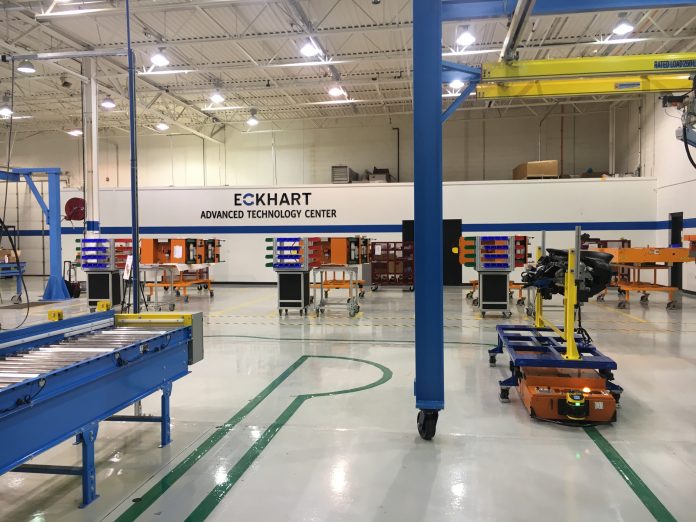 Eckhart, founded in Michigan in 1958 as a supplier to global manufacturers, today announced it has opened a 47,000 square-foot Advanced Technology Center in Warren. The new center will serve as the company’s technology showcase.

Eckhart’s services to global manufacturers include autonomous guided vehicles, collaborative robotics and flexible automation, 3D printing and additive manufacturing, assembly tooling, and engineering services. Industry 4.0 is a term that Germany coined back in 2011 to promote its strategy around the digitization and computerization of manufacturing, and is a key initiative of Automation Alley in Troy.

The Advanced Technology Center currently employs 60 people, but the Eckhart’s expansion plans call for the hiring of more than 100 workers over the next two years. The company says its expansion will accelerate adoption of Industry 4.0 technologies for the largest industrial companies in the world.

“Expansion into southeast Michigan, where there is a concentration of talent in the global epicenter for automotive research and development, is a key component of Eckhart’s growth strategy,” says Andrew P. Storm, Eckhart’s president and CEO.

“While the auto industry is focused on developing autonomous vehicles for use on the streets, Eckhart is accelerating the development of advanced technologies we believe will reshape the manufacturing ecosystem. Eckhart is investing to expand our suite of solutions and bring real value to all of our customers who realize, as we do, that the next industrial revolution is upon us.”