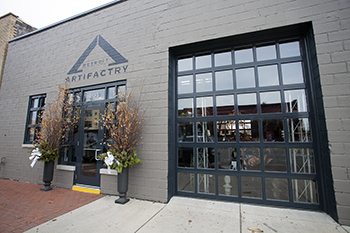 Detroit Artifactry, a combination furniture and antique store with a focus on industrial design, has opened in Detroit’s Corktown neighborhood.

Gail Kaye, owner of Detroit Artifactry, says items from local designers, artisans, and craftsmen are showcased, as well as women’s apparel and accessories. Products include repurposed wood and iron dining chairs; paintings on reclaimed Detroit wood; and belts with Swarovski crystals, among other items.

“Detroit is known throughout the world for its industrial and architectural design and was the first city in the United States to achieve the important cultural status (of “City of Design” by United Nations Educational, Scientific and Cultural Organization),” Kaye says. “We have some … examples of Detroit design history here at Detroit Artifactry.” 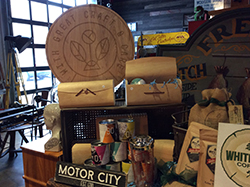 Kaye says the 2,000-square-foot store, located at 2135 Michigan Ave., across from Slows Bar-B-Q and Astro Coffee, is flanked by two industrial glass garage doors that open up to Michigan Avenue in the front and the train station in the back. She says Detroit Artifactry sells repurposed furniture, antiques, and original works of art, with many offerings that have been rescued from older homes and businesses throughout Detroit.

“I’ve been collecting unique pieces from all over the city for years,” Kaye says. “Detroit Artifactry is the culmination of all my efforts.”