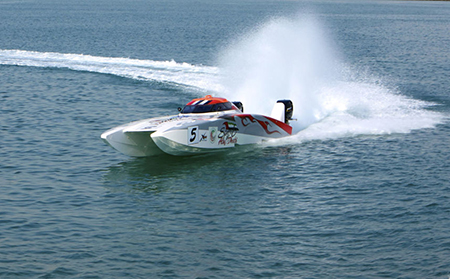 More than 150,000 people are expected attend the inaugural Downtown Detroit River International Powerboat Championships, to be held next month at the Detroit RiverWalk.

“It’s not going to be as big as next year, but it’s going to be nice,” says Tom McInnes, president and CEO of the championship. “We’re pulling this off in three months, and (an event like this) usually takes a year to plan.”

McInnes has high hopes for the event on Sept. 5-7, which will feature about 40 boats, ranging in size from 26 to 51 feet. “There are probably about 12 to 15 boats in a heat, so attendees are going to see a lot of back-to-back-racing and hear a lot of noise. It’s like NASCAR on the water,” he says.

He says the event’s promoter, Wes Wyatt, owner of the 24 Grille inside the Westin Book Cadillac Detroit and Citron Energy Drink Team, which participates in offshore boating races throughout the United States, has wanted to bring a race to Detroit for well over a year.

“(Wyatt) didn’t have a team that could help him bring the event downtown,” McInnes says. “I was on the Gold Cup committee for almost 20 years, so that’s where my experience and love of boat racing came in.”

The event — which carries the tagline “Detroit puts the race in your face” — will end with a championship presentation of the “Mayor’s Cup” by Detroit Mayor Mike Duggan.

In addition to the races, the free event will host live music and entertainment, food, drinks, health activities, with more to be announced later. Proceeds from the event will benefit local charities, including the Police Athletic League, Wayne County Sheriff Youth & Senior Education Fund, and Fallen & Wounded Soldiers Fund of Michigan.