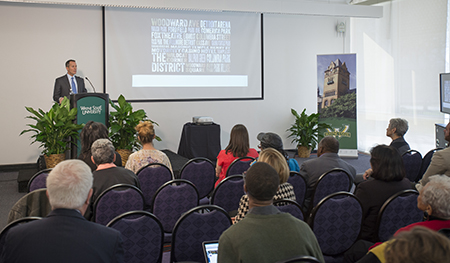 Christopher Ilitch, president and CEO of Ilitch Holdings, says the new Red Wings arena district — estimated to generate nearly $1.8 billion in economic impact for the region — will work to engage the community in the massive development.

Speaking at Wayne State University on Tuesday, Ilitch outlined his vision for the entertainment quarter that will encompass The Fox Theatre, Comerica Park, and the new arena. He says the development will attempt to bridge both a physical and psychological gap between Woodward Avenue and the mostly blighted area at the northwest corner of I-75 and Woodward, where the arena and surrounding developments will be built.

“To fill the gap that exists … it takes a really big development and a development with a lot of activity,” Ilitch says. “Our belief is that the community is integral to the success of our district. These stadiums are community assets.”

Referencing renderings of the stadium project, Ilitch identified the features of the design that he believes will help create year-round activity suitable for supporting the massive undertaking.

The stadium design is “deconstructed,” so that features such as team stores, concessions, and offices are separated from the arena bowl and opened to the street. The five external structures will be connected to the bowl by a glass roof, creating a mall-like covered promenade that will insulate visitors from inclement weather.

Overall, the arena, which will feature an LED screen-roof, will appear smaller from the street. Like Comerica Park, the 18,000-seat hockey stadium will be excavated down to a depth of 37-feet, meaning that when fans arrive, they’ll be walking down the steps rather than up. “We want it to be a charming building and very neighborly,” Ilitch says.

External to the stadium, the company has incorporated five themed neighborhoods that will offer residential housing, restaurants and bars, green spaces, and retail. Project designers have plans to build retail spaces on both sides of I-75, linking the more invigorated southern parts of the city with the areas north of the freeway.

While some have raised questions about the benefits of the stadium development for Detroiters, Ilitch says that his company is trying to create partnerships within the community so that Detroiters are offered multiple opportunities to succeed. The plans include creating affordable housing, designing internships for students at nearby Cass Technical High School, and creating incubator spaces for young minority chefs and restaurateurs.

Ilitch says he expects 51 percent or more of the construction jobs will go to Detroiters. The company will likely begin hiring for more than 8,000 jobs in late winter or early spring 2015. Additionally, Ilitch expects the project to create upwards of 1,100 permanent positions.

The company has pledged to invest significant capital into city services and infrastructure near the new project, in order to bring the area up to standards required for success. Likewise, Ilitch Holdings plans to adopt several city parks to improve green spaces.

The project broke ground on Sept. 25 and designers expect it to be completed by the fall of 2017.