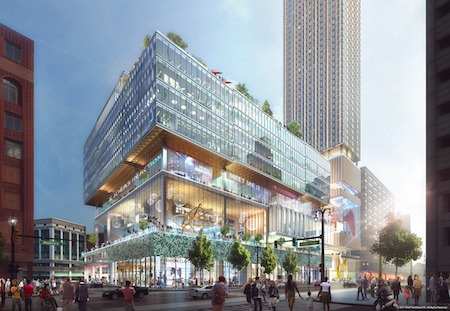 Bedrock, part of the Quicken Loans Family of Companies in downtown Detroit, went back to the drawing board and undertook a complete redesign of the Hudson’s Block in the central business district. The site is bounded by Woodward Avenue, E. Grand River Avenue, Farmer Street, and Gratiot Avenue.

The new design was unveiled Wednesday at a meeting of Detroit’s Downtown Development Authority.

Citing the need to offer a 360-degree experience as part of the $900-million, one-million-square-feet mixed use development, rather than focusing almost exclusively on drawing foot traffic from Woodward in the original design, Joe Guziewicz, vice president of construction at Bedrock, says the project was turned “inside out.”

While the new design will take longer to complete — it is projected to be finished in 2021 rather than late 2020 — it will still break ground in December. The new development features an 800-foot-high residential tower offering 330 units, along with a public observation deck near the top of the structure.

At ground level, residents will access the tower at the corner of Woodward and Gratiot, with the entrance set back from the sidewalk to provide for art sculptures as part of the entryway. When completed, the tower will be the tallest structure in Michigan.

In turn, the ground level of the tower will include a public food market with garage doors that will open when weather permits. The market, to be located at Gratiot and Farmer, will also offer access from a new, 60-foot-wide pedestrian promenade that will run between the tower and a neighboring mixed-use development at the north end of the site. The promenade will run from Farmer to Woodward.

To assist with truck deliveries, Bedrock plans to install one or two truck bays along Gratiot that will allow truck drivers to pull directly into the base of the residential tower, take their vehicle down an elevator to a lower level where it will be unloaded, before being spun 180 degrees on a large turntable. When the truck returns to street level, it will pull straight out.

James Witherspoon, director of architecture at Bedrock, says the new design will serve as a global landmark. “We often use the phrase that we are at the intersection of muscles and brains,” he says. “This will be a significant destination in Detroit.”

He added the project could help lure Seattle-based Amazon Inc., which last week announced it was looking to build a second headquarters, called HQ2, that could cost upwards of $5 billion and employ thousands of workers.

Guziewicz says the new design also reflects that Farmer and Library streets at the eastern side of the Hudson’s site is becoming an art district with galleries and other offerings like The Belt. Other new projects include the 100-room Shinola Hotel just north of the Hudson’s site that is projected to open in 2019, and the Monroe Block east of Campus Martius Park that will offer residences, offices, retail spaces, and public areas. It is expected to be completed in 2021 or 2022.