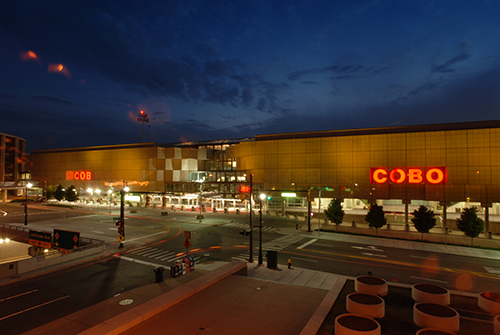 Hotel bookings and meetings in metro Detroit have more than doubled this year when compared to 2013, the Detroit Metro Convention and Visitors Bureau announced Wednesday. The Bureau confirmed that in addition to 12 multiple hotel meetings, 236,000 room nights have been booked for 2014, up from 129,000 last year.

“The hospitality industry has gone through much adversity over the past few years, but we’ve made the turn,” says Larry Alexander, president and CEO of the bureau. “Through an economic downturn and serious financial issues in our core city, we’ve turned adversity into opportunity.”

Alexander attributes the rise in bookings to both new investments from the private sector and a nearly $300-million renovation and expansion at Cobo Center, which is expected to be completed by the end of the year. He also says the bureau’s marketing campaign, “America’s Great Comeback City,” has resonated with both planners and visitors.

Last year, the 367-room Crowne Plaza Detroit Downtown Convention Center Hotel (formerly Pontchartrain) opened next to Cobo Center, while many other downtown hotels have undergone renovations or updates. In the fall, the Roxbury Group will open a 136-room Aloft Hotel in the David Whitney Building at Woodward and Park (along with 105 apartments and 7,000 square feet of retail space.

A good portion of the bookings for this year come from the Christian Congregation of Jehovah’s Witnesses International District Assembly to be held June 6-8 and July 24-27. The two events are expected to draw 90,000 attendees. Around 60,000 room nights have been booked.

Upcoming major conventions include over the next four years include: