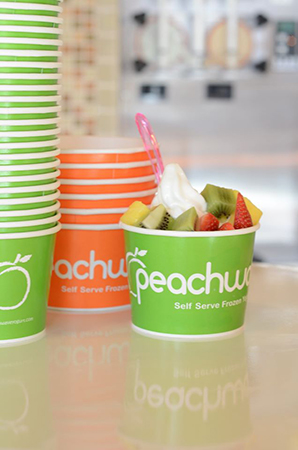 An entrepreneur from the west side of the state who bought a Peachwave Frozen Yogurt franchise two years ago and quickly turned it into the top selling store in the international chain, has purchased the company and is now CEO of more than 70 stores across the U.S., Canada, and Grand Cayman Island.

“My family fell in love with Peachwave while living in Connecticut, and I was excited to bring it to Michigan where I grew up,” says Boyd Feltman, CEO and co-owner of Peachwave. “I opened one store in Holland in 2013 that quickly became a top store in the chain. I then opened the second store in Wyoming (near Grand Rapids) in 2014.”

Feltman, a former executive of GE, says he left the company two years ago to pursue his dream of owning his own company. He says he plans to work closely with the operators and management to grow the brand with plans to open up stores in new markets. No specific locations have been decided.

“In addition to making a great yogurt, the Peachwave business model was so appealing because it does not take fees and royalties from the operators,” Feltman says. “I felt not having those costs would allow for a more resilient business that could keep profits working in the local economy in various ways.”