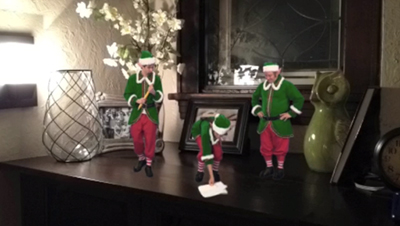 tSince launching last month, Santa Spy Cam has been downloaded more than 200,000 times in more than 40 countries, was featured on the Holiday Apps list on Apple iTunes, and received coverage on “Good Morning America” last weekend.

tCreated by Bloomfield Hills-based BELIEVEin!, the mobile and tablet app allows users to catch Santa and his elves on video as they visit the homes of sleeping children during the holiday season. “This could become a new digital tradition for families with young children in the age of smartphones,” says Alexander Craig, president and CEO of BELIEVEin!.

tDesigned to be an interactive experience for children aged 4 and older, the team behind Santa Spy Cam provides a number of stories to use alongside the app, including “Seven Nights Before Christmas."

t“Think of the stories like recipes from a cookbook,” Craig says. “An animated version of the story is on our website, and then there’s a scene from the story inside the application that you can use in your own home that brings the story to life.”

tScenes that show an elf leaving behind a candy cane or a sheet of paper can become more immersive when parents replicate the item left behind in the video. But Craig says the scenes that his business partner, “Grandpa Jim,” is especially proud of involve Santa’s sleigh and his reindeer.

t“Those are real reindeer,” Craig says. “There are only two licensed reindeer farms in the state of Michigan. We used reindeer from one of them for the videos and are co-marketing with the other one.

tThe Santa Spy Cam is the first in a series of digital offerings. “I think we’ve got on our hands on the beginnings of a digital entertainment company with patent-pending technology that allows us to leverage the smart and computing capability in smartphones and apply that technology across a broad spectrum of new opportunities. And Santa’s Spy Cam is just the first one out of the end of the barrel,” he says.

tThe app, which includes three video scenes, is available for free download. Additional scenes are available individually up to $2, or in bundles via In-App purchase. For more information or to download the app, visit the iTunes App Store or santaspycam.com. An Android version of the app is expected in 2014.