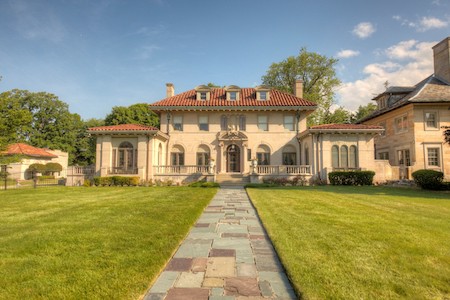 The former Barry Gordy Mansion has found a new owner, following a sale brokered by Deborah Smith of the Family First Team at Keller Williams. Known today as the Motown Mansion, the sale of the Boston-Edison Historic District property, located at 918 W. Boston Blvd., closed yesterday for $1.65 million.

Former owner Cynthia F. Reaves sold the home to a native Detroiter who is relocating back to the area from San Francisco. Originally listed for $1.595 million, the home’s sale price is higher than any sale in the Boston-Edison district in recent history and the second highest sales price for a residential property in Detroit this year, according to data from Keller Williams.

Smith attributes the sale price to Reaves restoration of the home, which prioritized preservation of the mansion’s original architecture and structure when possible. Situated on a 2.2-acre lot, the property includes a 10,000-square-foot primary residence and an adjoining 4,400 square foot pool house. A carriage house on the property also has its own apartment, and the home’s design features include stain glass windows, black walnut paneling, and a handcrafted fountain.

“Using the Keller Williams international network, I was able to give the home the exposure that a property of this stature requires. In fact, it was through this marketing that the eventual buyer contacted me to request a viewing,” says Smith. “The process took two years and we went through several deals with several buyers before Reaves found the right buyer to protect the legacy of this iconic home and become its new steward.”

Built in 1917 by lumber magnate Nels Michelson, and formerly the residence of Berry Gordy, founder of Motown Records, the estate was designed in an Italian Renaissance style.