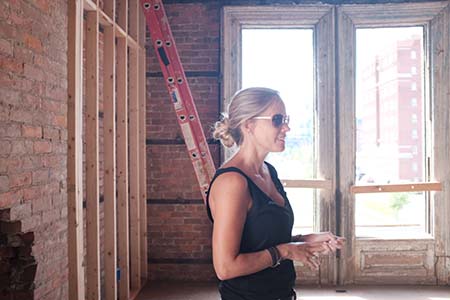 Rehab Addict host and Michigan native Nicole Curtis and Quicken Loans President Jay Farner today offered a tour of the nearly 140-year-old Ransom Gillis home in Detroit’s Brush Park neighborhood ahead of its renovation, to be aired in November on the popular HGTV show.

The Ransom Gillis house, 205 Alfred St., was built between 1876 and 1878. The Venetian Gothic-style house was designed as a single-family house by Henry Brush and George Mason, and has remained unoccupied since the mid-1960s.

“This is a very large space — when this house was built, the kitchen was most likely in the basement,” says Curtis of Lake Orion. “(The owners) probably had servants.”

During the renovations, the house will be reconfigured into two separate residences. Curtis says while the home’s historical details will be preserved, she will also add include modern amenities.

“Everything in this home is like a teaching lesson,” Curtis says. “When kids walk into the home and see a fireplace, we don’t want them to just think it’s there. We want them to see the fireplace and realize that it’s how people heated their homes at the time.”

The room-by-room renovation and filming began last month, with renovations expected to be completed by the end of the month. The series, which will air in an eight-part series, will feature preservationist Curtis’ work on the property along with appearances by Farner. The transformation will include the sourcing of fixtures and furnishings from metro Detroit. The series will culminate with an open house for local homebuyers, although Farner says he’s not sure if the home will be available for rent or sale.